Carbon-Neutrality Plan Is in the Works

This month marks one year since Tulane University President Scott Cowen signed the American College and University Presidents Climate Commitment, pledging that Tulane would measure its impact on global warming and then develop a plan to achieve carbon neutrality. Shelley Meaux says the first step is compiling a greenhouse-gas emissions inventory, a tool that measures an institution's impact on climate change. 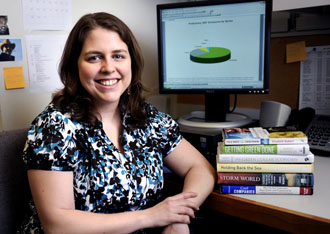 “Preliminary results show that buildings are the largest source of greenhouse gases at Tulane, followed by travel for university business, commuting by faculty, staff and students, waste and, finally, the vehicle fleet,” says Meaux, senior program coordinator in the Tulane/Xavier Center for Bioenvironmental Research.

The advisory committee includes representatives from all schools, several administrative departments and all constituents of the university, including students. John McLachlan, director of the Tulane/Xavier Center for Bioenvironmental Research, is chair of the committee.

Meaux says the emissions inventory, which is nearly complete, will be similar to a 2000 inventory except the new one will also measure travel and waste, which were not included in the previous research.

“The current emissions inventory will be the one that guides the climate-neutrality planning process and that progress will be measured against,” says Meaux.

Once the emissions inventory is finalized, it will be publicly released, and the committee will have a clear road map for ways in which the university could and should lower its emissions. By May 2010, the committee will develop a plan for Tulane to achieve carbon neutrality  including a time frame  to submit to Cowen.

Meanwhile, committee members and others at Tulane are already working toward a greener culture. University Services, for example, has implemented many green dining options throughout campus, as well as waste-management and recycling programs. Facilities Services is making energy-efficient improvements on the university's campuses, such as replacing outdated light fixtures with new ones with occupancy sensors to automatically shut off lights when a room is empty.

“The goal is to attain a Silver LEED certification level,” says Creppell. “Reusing an existing building, rather than building new, recycling building materials, specifying local and regional materials, building in energy and water efficiency, and maximizing daylight while preventing solar heat gain are just a few of the green features of the renovation project.”

More green space and more room for pedestrians also are priorities for the university. In May, construction begins to make part of McAlister Drive into a landscaped pedestrian mall, the first phase of a master plan that will ultimately join the McAlister and Newcomb quads into a single green space.

Technology Services is creating printing policies to cut down paper waste universitywide. Server consolidation through the VMware Project also has been initiated in response to the growing number of servers operated at the university.

“Typically, each server on the Tulane network represents a physical computer which must be housed, maintained, powered, cooled, backed up, secured and ultimately replaced,” says Ann Kovalchik, deputy chief information officer. “To date, nearly 115 servers supported by Technology Services have been consolidated into nine VMware blade computing machines, reducing power consumption by over 70 kilowatts or 324 tons of carbon emissions. We hope to continue to consolidate servers using the VM strategy.”

Submit your ideas for reducing the university's energy use, waste and greenhouse gas emissions to the Climate Commitment Advisory Committee by e-mailing Davey.