Care and Feeding of Campus Cats

Cats are independently roaming the green spaces of the Tulane uptown campus, but an organization called Campus Cats is looking after them. Most of the cats are feral and not domesticated pets. And even though they most likely will never be tamed, these cats and human beings enjoy amity. 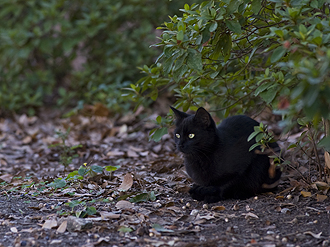 Without population control, the number of cats on the uptown campus could become overwhelming, according to the Campus Cats organization. (Photos by Paula Burch-Celentano)

A Tulane organization of volunteers, Campus Cats has the mission of caring for the cats by feeding them. In addition, Campus Cats strives to keep the cat population within reasonable bounds by trapping cats, having them spayed or neutered, and then releasing the cats back outside, where they help to keep the neighborhood free of rodents.

To support its charitable work on behalf of the animals, the organization will hold a fund-raiser next Friday (Feb. 27) from 11 a.m. until 1 p.m. in the Lavin-Bernick Center's Nalty Commons. The event will be held in honor of the Humane Society of the United States' Spay Day 2009 (which falls on Mardi Gras this year).

The chief trapper with Campus Cats is Barb Ryan, executive secretary in the Department of English. Ryan said that on a recent night she trapped five cats from two different litters. She estimated that the younger ones were 4 to 5 months old, and the others were from 7 months to a year.

“I have trapped, spayed or neutered and released 21 cats on campus since last October,” said Ryan. Two of the cats were adopted into homes. 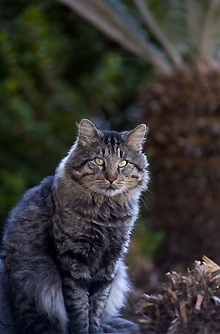 Most of the cats that live on the uptown campus are feral and not domesticated pets, but they help out by keeping the neighborhood free of rodents.

No one knows the exact number of the feline population on the uptown campus, but the need to control the population is rather urgent. According to SpayUSA, a female cat, her mate and all of their offspring, producing two litters of kittens per year, with 2.8 surviving kittens per litter, can procreate more than two million cats in eight years.

Ryan said she first started noticing the black and black-and-white cats, as well as several with Siamese coloring, in April 2008. She began to feed the cats that were living under Hebert Hall. Now she spends $20 every week to buy a large bag of cat food for them.

“They're my charity. I love cats, so this is how I choose to spend my money,” says Ryan, who has six cats and a rescue dog in her home. She's also feeding four more cats that live outside her house. “They depend on me. They were so happy to see me return after Hurricane Gustav!”

Ryan says she learned about the proper use of a trap when she joined Campus Cats. Once a cat is trapped, a member of the organization takes the animal to the Southern Animal Foundation, which charges $10 per cat to spay and neuter and provide initial immunizations.

After a cat is neutered, the cat's ear is clipped to indicate that it has been altered.

Campus Cats is affiliated with the Tulane Green Club. Interested faculty, staff and students are welcome to join. For more information about participating, call Shelley Meaux, senior program coordinator in the Tulane/Xavier Center for Bioenvironmental Research, at 504-862-8441 or e-mail Campus Cats at campuscats@tulane.edu.