Dr. Howard Sheridan, a 1969 alumnus of Tulane School of Medicine and award-winning photographer, updated Aesop's fables to apply to the realities of modern medical careers at the Tulane Medical Alumni Association meeting on Oct. 8. 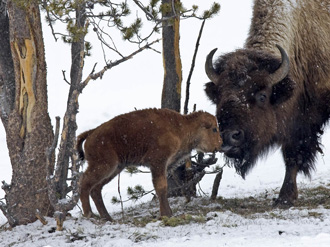 In a presentation to an appreciative audience of medical school students, faculty, alumni and staff, Sheridan used his dramatic photographs of wildlife to illustrate choices in medical practice, personal life and business that can impact a doctor's success and reputation.

Sheridan, an interventional and diagnostic radiologist practicing in Fort Meyers, Fla., and a successful businessman, began taking photos of animals about eight years ago, and has traveled from Alaska to Antarctica to capture striking images of everything from polar bears to pronghorn antelope to penguins.

Sheridan won an award as an English-edition winner, animal category, of the National Geographic 2007 International Photography Contest. His photograph of two bison in a frozen landscape warming themselves at a hot spring, "Sauna Break in Yellowstone National Park," was featured in the September 2008 issue of National Geographic. His wildlife photographs also have been published in Alaska and Montana magazines.

Attendees savored the counterpoint of Sheridan's sage and humorous advice along with his spectacular animal photos.

Sheridan displayed a photo of a herd of mountain goats balancing on rocky pinnacles to illustrate the teamwork that partners in a medical practice should strive for. A line of bison slogging through snow illustrated qualities of leadership doctors must develop. Dramatic images of battling elks symbolized the need to be prepared for change. An antelope giving birth to twins highlighted the need for focus even in the midst of multi-tasking.

A daydreaming polar bear on an ice floe provided an image for heartfelt advice to the students: Follow your aspirations wherever they lead you.

"It's great to have goals," Sheridan said, "but you absolutely have to enjoy the journey."