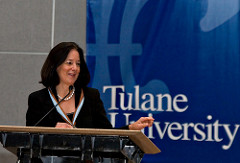 The Carol Lavin Bernick Family Foundation, whose generous support of Tulane University built the iconic and award-winning Lavin-Bernick Center for University Life, has pledged $5 million over the next five years to support Tulane’s faculty.

The gift will provide $1 million annually over the next five years for department and faculty needs in research, recruitment, development, continuing education and student engagement with grants to individual full-time faculty members up to $15,000.

Grants from the fund will be applied to a variety of faculty initiatives.

“Given President Fitts’ emphasis on academic collaboration across disciplines, I expect some of these funds will be used to create academic synergies between faculty from different fields,” said Carol Bernick, founder of the Carol Bernick Family Foundation and vice chair of the Board of Tulane.

“This gift is designed not only to have a demonstrable effect on academic innovation at Tulane but to also encourage others to join me in this effort,” Bernick said.

Bernick is active in numerous community efforts, including founding Friends of Prentice, a volunteer group of executives and professionals that has raised millions of dollars for Chicago’s Prentice Women’s Hospital of Northwestern Memorial Hospital, where she serves as board chair. She is also a member of the Women’s Board of the Boys and Girls Clubs of Chicago and serves on the Executive Committee of the Economic Club of Chicago. In addition to serving on the Board of Tulane, she is a member of the Dean’s Advisory Board for Northwestern University’s Kellogg School of Management and the Women’s Leadership Board of Harvard University’s Kennedy School of Government Network.

This is the second $5 million gift Tulane has received in recent weeks. On Jan. 29, Tulane announced a $5 million gift from David Mussafer and his wife Marion to turn the former home of Tulane's School of Social Work into Mussafer Hall, a transformative space that will unite career programming, academic advising and success services.