The Newcomb Alumnae Association didn't plan it this way, but the association's 2008 award winners are linked by time and space. Carol Lavin Bernick, recognized this year with the Outstanding Alumna Award, played a major role in building Tulane's Lavin-Bernick Center for University Life. That building houses IN Exchange, a fair-trade shop created and operated by Erica Trani, recipient of the Young Alumna Award. 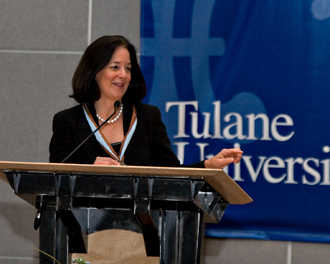 Carol Lavin Bernick, who graduated in 1974, is the recipient of this year's Outstanding Alumna Award from the Newcomb Alumnae Association. She is executive chair of the $1.4 billion global Alberto-Culver Co. (Photos by Jessica Bachmann)

The award ceremony was held Thursday (Oct. 2) in the Woldenberg Art Center, home of the Newcomb Art Gallery, supported by Eugenie Jones Huger, the Service and Loyalty Award winner.

“It's a great coincidence,” said Carter Dudley Flemming, the Newcomb Alumnae Association president. “They have been giving and giving to all the rest of us, so we are proud to recognize them tonight.”

Bernick, who graduated in 1974, is executive chair of the $1.4 billion global Alberto-Culver Co. She received the Outstanding Alumna Award for sustained achievement in her career and volunteer efforts.

Awards committee chair Catherine Hagaman Edwards described Bernick as “a role model for all women who wanted to succeed in their personal and professional lives.”

Not only did Bernick develop such products as Static Guard at the company her parents founded in 1955, but she also increased sales growth rates and profit margins, and instituted a nationally recognized cultural overhaul. A major Tulane contributor, she is a vice chair of the Board of Tulane, and she and her family gave a generous donation to build the Lavin-Bernick Center. 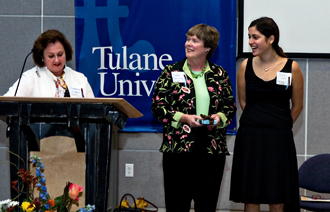 Trani, who graduated in 2007, was honored for pioneering efforts in fair-trade marketing at Tulane and in New Orleans.

While accepting her award, Trani said, “People  ordinary people  went far out of their way to help me achieve my goals. I had incredible teachers and great opportunities. I'm happy to acknowledge the many people who helped me along my long  it may seem short to many but it was long to me  journey.”

The association honored Huger, a 1953 graduate, for her years of devotion to the art gallery. Huger could not attend the ceremony, but Edwards said she was touched by the honor.

“She was so surprised. She said, 'Who would nominate me?' ”