With big-name celebrities, highly distinguished recipients of honorary degrees, state-of-the art-video production, herald trumpets and a pyrotechnic finale, the Tulane University 2009 Commencement was an academic pageant to behold  yet it will likely be best remembered as the ceremony that almost wasn't. 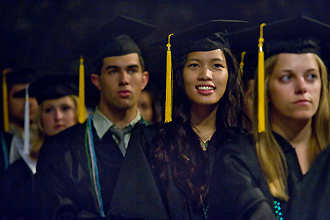 Members of the “Katrina class” take the spotlight at Commencement 2009, which celebrated their heroism and determination to help Tulane and New Orleans after the storm's devastation. (Photos by Paula Burch-Celentano)

“In the hours and days after the storm, I often wondered whether I would ever see you again,” Tulane President Scott Cowen confided to the more than 2,000 members of the “Katrina class” who were seated before him on the floor of the Louisiana Superdome on Saturday (May 16).

After Hurricane Katrina closed Tulane for the entirety of the fall 2005 semester, Tulane administrators had no guarantee that the university's students-in-exile would return to the still-ailing city.

Saturday morning's proceedings were largely a celebration that they did return. “Within 48 hours of the university's reopening and your return,” said Cowen, “the population of the parish increased by approximately 20 percent and the future of Tulane and New Orleans truly began to shine.”

The degree candidates let out an audible “aw” at the conclusion of Cowen's speech when the president told them, “I end by freely and sincerely admitting how much I love you.” Read the full text of the president's remarks here.

In her commencement address, talk show host Ellen DeGeneres praised the graduating class for being “tenacious and courageous.” Then, commenting on their academic gowns, she said, “Usually when you are wearing a robe at 10 in the morning it means you've given up.” 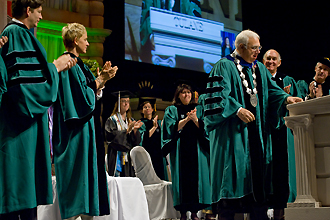 It's a standing ovation for Tulane President Scott Cowen, leaving the podium at right, after his speech. Applauding him are Harry Connick Jr., left, and Ellen DeGeneres, second from left, who gave the keynote address.

DeGeneres, whose appearance was an encore to a brief surprise showing she made during Tulane's 2006 commencement, admitted that she never attended college. “I'm not saying you wasted your time and money,” DeGeneres quipped, “but look at me, I'm a huge celebrity.”

Turning serious, DeGeneres discussed in a frank and personal narrative how she kept her sexuality a secret from the public during the early part of her career, as well as how her career came to an abrupt halt when she publically announced she is gay.

“The phone didn't ring for three years. I had no offers. Yet I was getting letters from kids who had almost committed suicide but didn't because of what I did. I realized I had a purpose and it wasn't just about me and celebrity.”

She urged those in the audience to live lives of integrity, to follow their passion and not tread along anyone else's path. “Unless you are in the woods and you're lost and you see a path  then by all means you should follow that.”

In the morning's most poetic moments, class speaker Helen Jaksch talked to her classmates about floods, both real and metaphorical. There are only two ways to deal with them, she said: by sinking or swimming. 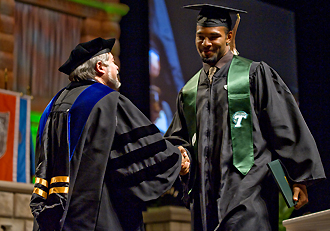 Katrina class member and NFL star running back Matt Forte, right, celebrates his graduation with a handshake from Angelo DeNisi, dean of the A. B. Freeman School of Business.

“You choose to find power in the water or you drown,” said Jaksch. “We are called the 'Katrina class.' People questioned why we came back. Tulane students are swimmers.”

Tulane's unified commencement ceremony, which represents all of its schools and colleges, also featured musical performances by Dr. Michael White's Original Liberty Jazz Band, the Pipes and Drums of New Orleans and a performance of “Do You Know What It Means to Miss New Orleans” by singer Wanda Rouzan.

Honorary degrees were awarded to FranÃ§oise BarrÃ©-Sinoussi, a scientist who co-discovered the virus responsible for AIDS; Harry Connick Jr., a New Orleans native and internationally known musician and actor who has been actively involved in the city's post-storm recovery; William McDonough, a leading figure in sustainable architectural design and a partner in the Make it Right Foundation that is building safe and healthy homes in New Orleans' Lower 9th Ward; and Jessie Gruman, president and executive director of the Center for the Advancement of Health.

The Tulane University 2009 Commencement ceremony opened with sweet and serene notes of the traditional gospel standard “Just A Closer Walk With Thee” and closed in a blaze of pyrotechnics and a blizzard of confetti. They were appropriate bookends to a program marked by a wide range of emotional moments.