With the Obama administration's lifting of an eight-year-old ban on federal funding for embryonic stem cell research, the moral and ethical debate over the use of fertilized human eggs in genetic research has grown sharply louder. It's a fray that Dr. Brian Butcher, associate director of the Tulane Center for Gene Therapy, is not inclined to enter. 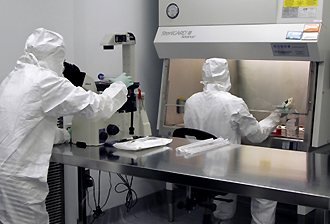 The preparation of adult stem cells for clinical trials is under way at the Tulane Center for Gene Therapy. (Photo by Rick Olivier)

While Butcher says he welcomes the new administration's position scientifically and supports the funding of embryonic stem cell research, he says the center will continue to use adult stem cells as it has done since its inception in 2000.

Tulane researchers, he says, are “quite happy” working with adult stem cells for reasons that are purely scientific.

“There is still disagreement about which are the best cells to use, stem cells from adults or from embryos,” Butcher says. “There are certainly very marked differences between them and certainly we have some concerns about embryonic stem cells, that led us to use adult stem cells.”

According to Butcher, concerns include those regarding cell rejection, possible virus transmission from growth medium and the development of tumors.

“Perhaps the most serious concern is that it seems embryonic cells are immortal  can grow on forever  and there's a concern that they can grow into cancer cells,” says Butcher. “There have been reports that as many as 25 percent of the cells can go on to form cancer cells. In adult stem cells there is no indication that can happen, perhaps because adult stem cells have a finite lifetime.”

Preferring not to wade into the politics of the issue, Butcher says he believes the National Institutes of Health will resume checks and balances to ensure that only embryos from fertility clinics, slated to be destroyed  and then only with approval of both donors  will be used for research purposes, but that the research done on embryonic stem cells will speed the delivery of treatments developed with adult stem cells as well.

Regardless of the politics, Butcher says the lifting of the ban is good news for science and for medicine.

“Obviously, the more research done, the better understanding we will have. I think this is going to really speed up our understanding of stem cells in general.”