In 1955, the U.S. Supreme Court delivered its landmark Brown v. the Board of Education ruling, renouncing the “separate but equal” doctrine of Jim Crow laws and opening the way for school desegregation. One year later the court tasked federal district and appellate courts with overseeing the enforcement and implementation of Brown's constitutional mandate. 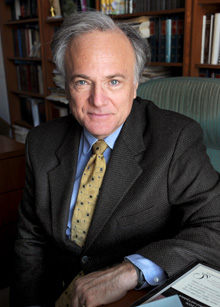 At that moment, Judge John Minor Wisdom of New Orleans and his colleagues on the 5th U.S. Circuit Court of Appeals were “thrust onto the front lines of the civil rights battlefield of the 1960s,” writes Tulane law professor Joel Wm. Friedman, author of a newly published biography, Champion of Civil Rights: Judge John Minor Wisdom.

With jurisdiction over six states in the Deep South, the 5th Circuit in the course of several decades played a preeminent role in desegregating state colleges and universities, securing voting rights for African Americans and constraining racial discrimination in jury-pool selection.

“And no single member of that court played a more pivotal part in formulating and implementing his fundamental reshaping of American society than its undisputed scholar-in-residence, Judge John Minor Wisdom,” writes Friedman of the Tulane Law School graduate (class of 1929), who at first glance might seem an unlikely hero of the civil rights movement.

In the early pages of Champion of Civil Rights, readers learn of Wisdom's affluent family, privileged upbringing and lifelong affiliation with the city's elite Carnival organizations.

Friedman, the Jack M. Gordon Professor of Procedural Law and Jurisdiction at Tulane Law School, had unrestricted access to Wisdom's papers as well as opportunities to interview the judge before his death in 1999. He says that Wisdom's passion for equality was instilled at an early age.

“Judge Wisdom was guided by a deep sense that everyone should be treated fairly and with dignity,” says Friedman. “It was something his mother believed in and passed on to her children.”

While Wisdom's crucial role in the 5th U.S. Circuit Court of Appeals is obviously central to Friedman's book, the author surveys the judge's entire professional career, pausing at key moments along the way for closer inspection. 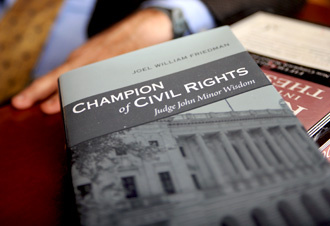 From Wisdom's first appearance before the U.S. Supreme Court as a young attorney in 1951, to his subsequent leadership in reforming Louisiana's Republican Party, the stories are told engagingly, with Wisdom's thoughts, conversation and correspondence set against the backdrop of state and national affairs.

We learn early on of Wisdom's love for reading (as a young man he even flirted with the idea of pursuing a career in literary criticism), and Friedman keeps that passion front and center, often noting examples of the judge's legendary erudition and precision in writing legal briefs and opinions.

In a case challenging the exclusion of African Americans from criminal juries, the opinion written by Wisdom was, writes Friedman, “a classic example of the interweaving of literary references, historical perspectives, painstaking legal research, lyrical prose and a passionate dedication to fairness into the dissection of a complicated and controversial issue that would become the hallmark of a 'Wisdom opinion.'”