When Tania Tetlow, associate professor of law and director of the Tulane Domestic Violence Legal Clinic, went to Kigali, Rwanda, to teach this past summer, she found a country committed to change. 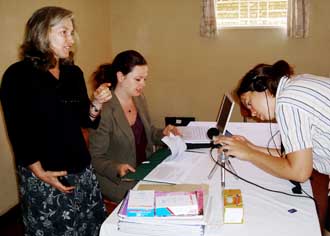 In 2008, Rwanda became the first nation to elect a female-majority legislature. The power of women in the Rwandan national legislature is a sign of how far the country has progressed since the Rwandan atrocities of 1994. In the genocide, nearly one million people were killed and an unknown number of women were raped and brutalized. Rwanda today has a population of approximately 9 million.

In the course, "Women and Governance Through the Lens of Gender-Based Violence," Tetlow focused on women's international human rights law. Everywhere in the world, legal systems are tied to culture, she says, and laws only offer partial solutions to ending violence.

Tetlow observes that in both the United States and Rwanda, rape victims experience intense shame and often know the perpetrator. In the United States, however, victims frequently are asked why they don't simply leave a violent relationship.

"In Rwanda, no one asks, 'Why did she stay?'," says Tetlow. Rwandans understand the legal, cultural and economic forces that keep women trapped in violent relationships. In the United States, these realities tend to be ignored.

In the course, part of the Newcomb College Center for Research on Women's Summer Institute for Gender, Leadership and Development, Elizabeth Powley, an expert in gender and postconflict reconstruction in Rwanda, led discussions between students and female members of the Rwandan Parliament and other leaders working against gender-based violence. Center for Research on Women staff members Jennifer Dudley and Charlotte D'Ooge developed multimedia projects with the students.