As China's economy expands by leaps and bounds, there's a new openness toward philosophical inquiry taking place in the Asian giant. The Chinese are eager to learn about the classics of Western philosophy. Two members of the Tulane philosophy department  Richard Velkley and Ronna Burger  are contributing to the exchange of ideas by participating in academic conferences, having their books translated into Chinese and mentoring students from China. 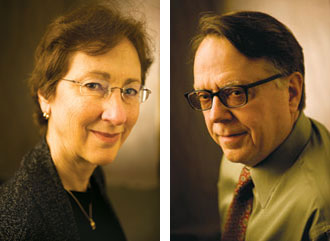 Ronna Burger, left, and Richard Velkley of the Tulane philosophy department are leading an exchange of ideas with Chinese scholars who eager to learn about the classics of Western philosophy. (Photos by Paula Burch-Celentano)

It's a heady time in China with scholars undertaking intense study of the Western philosophical tradition, says Richard Velkley, Weatherhead Professor of Philosophy at Tulane.

Velkley has made three trips to China since 2004, attending academic conferences at the University of Beijing and the Chinese University of Hong Kong, where he delivered talks on the German philosophers Immanuel Kant and Martin Heidegger, as well as on the Western Enlightenment.

Chinese scholars are quite interested in Western Enlightenment ideas of rights, law, justice, freedom, reason and self, says Velkley. But they still revere the Chinese philosophical tradition, including the thought of Confucius, the 5th-century B.C. Chinese philosopher.

What impresses Ronna Burger, professor and chair of the Tulane philosophy department, about the current Chinese interest in Western philosophy is that the Chinese seekers show something like a Confucian respect for teachers even while they are searching out Western ideas of freedom and self.

“They have this idea about how much you learn from a teacher,” says Burger. “They seem to understand that the transmission of a tradition requires more than just reading a book on your own.”

Reading, of course, is a start, and Burger has learned that a Chinese translation of her own book on Aristotle's Ethics is currently under way.

Two books she edited, Encounters and Reflections: Conversations with Seth Benardete and The Argument of the Action: Essays on Greek Poetry and Philosophy by Seth Benardete, already are available in Chinese translation. These books are part of a larger project to make available in China the classical works of Western philosophy and studies of them by modern scholars.

Tulane's philosophy department has had Chinese graduate students in recent years studying philosophy of mind and contemporary political philosophy. In fall 2009, two individuals will be coming to Tulane as visiting scholars, supported by Chinese government grants. One, a graduate student from Sun Yatsen University, will be working, under Burger's supervision, on a translation and interpretation of Plato's Meno, a dialogue in which the ancient Greek philosopher Socrates leads a discussion of the question, What is virtue? The other, a lecturer from Lanzhou University, plans to work with Velkley on Kant and Heidegger.