A bad situation may be getting worse in Zimbabwe as a cholera epidemic continues to spread. As of Tuesday (Jan. 6), the World Health Organization is reporting more than 34,000 diagnosed cases and 1,732 deaths since the epidemic was first reported last August. 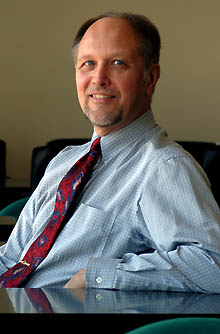 These deaths were imminently avoidable, according to Dr. Richard Oberhelman, professor and acting chair of the Tulane Department of Tropical Medicine.

“Cholera is really a preventable death,” Oberhelman says. “Death is due to dehydration, and that can be treated with oral fluids in more than 90 percent of the cases.”

Therein lies the vicious cycle of the disease. The bacteria that causes cholera is waterborne, and when the only water source is tainted, there is little chance to constrain the rate of mortality among those stricken by the disease.

Oberhelman, whose research interests include probiotic strategies for treatment and control of pediatric diarrhea in developing countries, explains that the bacteria produces a toxin that causes the gut to secrete water, leading to extreme dehydration.

“When cholera strikes in areas where there is extreme poverty, although people may know what they need to do to treat their water, they may not have those resources available to them. It depends on the governments and the public health resources to come in and treat the victims,” he says.

The problem in Zimbabwe is being exacerbated by the nation's political climate. A feud between President Robert Mugabe and the opposition party following last March's election has further disrupted an already unstable economy, resulting in the loss of housing and limiting humanitarian response.

“We need to be aware of the humanitarian crisis that is going on there,” says Oberhelman. “This is not an expensive thing to fix. If allowed to, I think we would certainly be able to provide resources relatively cheaply.”

While Oberhelman says the disease is relatively easy to treat, the size of the epidemic creates complications.

“Getting enough purified water, or the resources to treat the water for a population as large as the one affected by this outbreak, is really challenging.”

Nevertheless, Oberhelman believes the international community needs to be aware that this epidemic can be eradicated if the resources can be allocated.

“This is the type of epidemic that can be stopped. Not like HIV or TB, which are chronic infections that are difficult to treat, and have lifelong implications. This is a self-limited infection that can kill people, but if treated adequately people recover fully.”

Oberhelman adds that preventing the conditions in which the bacteria breeds is the best defense against future outbreaks.

“You really need to focus on education, and resources for decontaminating water, whether that's chlorine tablets, filtration systems, or providing alternative sources of water.”