Tulane professor William Brumfield has recorded, for 40 years, in words and photographs, the history of Russian architecture as it developed in major cities and outlying regions. Yet the artistry of an ornately decorated icon screen used to partition a Russian Church sanctuary still fascinates him, as does what he calls the improbable and unpredictable artistic legacy of the Russian Orthodox Church. 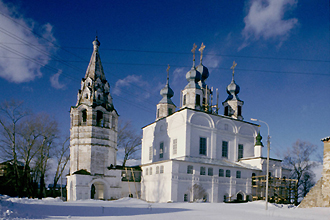 The Trinity-Gleden Monastery, located in the northern Russian province of Vologda, rises above a field of snow that still glistens in the month of March. (Photos courtesy of William Brumfield)

In tens of thousands of photos that have appeared in numerous publications, the National Gallery of Art and the Library of Congress, Brumfield, professor of Russian studies, has compiled a body of work that visualizes Russian culture in high resolution.

Much of Brumfield's work comprises images of Russian churches, cathedrals and iconography, which is understandable, he says, given the “overwhelming role” of the Russian Orthodox Church in the country's culture before the time of Peter the Great.

“Because of Russia's history and its climate, there have been few competing institutions,” says Brumfield, who with the late Milos M. Velimirovica, an expert in Byzantine musicology, co-edited Christianity and the Arts in Russia, reissued last fall by Cambridge University Press. “The church also played a role in other leading European cities, but there were parallel institutions and individuals who patronized the arts in a major and lasting way in them.”

If a wealthy Russian merchant wished to leave behind an endowment, he invariably left it with the church, which, according to Brumfield, “would ultimately be refashioning that gift into some visible purpose  a fresco or icon screen. It was all funneled through the church. That is why religious art is such an important component of Russian culture.

“You look at the National Trust list in England and you'll see all these secular monuments. There was nothing like that in Russia. The church, the monastery and the walls around the monastery are almost the only artifacts we have of Russia before the late 17th century and the reign of Peter the Great.” 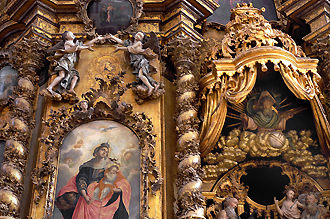 This detail is taken from the iconostasis, or carved and gilded icon screen, located inside Trinity Cathedral. It was constructed over a period of eight years in the late 18th century.

The frescoes, icons and spiritual paintings of the 14th through 16th century are among the high points of Russian art, says Brumfield. “Once the secular influence comes in, the Russians begin to do what everyone else was doing  painting for patrons, decorating secular buildings, building secular structures. All that begins to merge with the West.”

Perhaps an equally remarkable development in Russian art took place in the early 20th century, when the country's cadre of avant-garde painters rediscovered the religious works that had been discarded and forgotten by the church. In the midst of an increasingly secular society, these artists began adapting icon painting into their own works.

The imprimatur, ironically, came from outside the culture, says Brumfield, when the renowned French painter Henri Matisse was shown examples of 14th-century icons while the artist was on a trip to Moscow in 1911.

“He was blown away, and said, 'This is the most profound religious art I have ever seen,'” adds Brumfield.

“Suddenly there was this realization that they had rediscovered the greatest spiritual visual creations of their own culture. The whole thing is perfect and totally unpredictable, this merger of medieval and modern at the beginning of the 20th century.”

Collections of Brumfield's photographs are online at the Library of Congress “Meeting of Frontiers” website and in the William Brumfield Collection. A cultural affairs site for the Vogoda region of Russia also features his work.