A widely acclaimed expert on cancer biology, circadian rhythm and the health implications of nighttime exposure to light has joined the Tulane University School of Medicine. Dr. David Blask is a professor of practice in the Department of Structural and Cellular Biology. 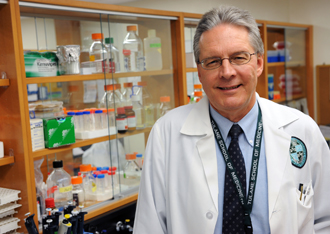 Dr. David Blask will help Tulane further develop efforts to build a center of excellence in circadian melatonin cancer biology. He is a professor of practice in the Department of Structural and Cellular Biology. (Photo by Sally Asher)

In the early 1980s, Blask was one of only a handful of scientists studying how the pineal gland regulates breast cancer development and growth through melatonin, a hormone produced by the gland at night during sleep. Melatonin modulates many of the body's natural circadian rhythms, including the sleep/wake cycle, and has been shown to have important anti-cancer properties.

“This was considered fringe science at the time,” said Blask, “and several colleagues warned that pursuing this area of study would be a career breaker.”

However, his lab at the University of Arizona was the first to demonstrate that physiologic nighttime doses of melatonin suppress the growth of human breast cancer cells in culture. Steven Hill, current chair of the Department of Structural and Cellular Biology, was a graduate student in Blask's lab at the time and performed these groundbreaking experiments.

“It was one of those 'eureka' moments that don't come too often in one's career,” said Blask. Since then, he has become a world-renowned expert on the negative health implications and increased cancer risk associated with melatonin suppression due to exposure to light at night.

Using specially designed chambers that allow precise control over light exposure at night, Blask and his research team were the first to demonstrate that manipulating the intensity of light at nightand thus melatonin productiondramatically affects human breast cancers growing in rats. Also, using a unique experimental model system developed in his lab, they also demonstrated that the melatonin-deficient blood of human female subjects, following their exposure to bright fluorescent light at night, stimulated the growth and metabolism of human breast cancers in rats when the blood was directly pumped through these tumors.

This landmark research helped to lay the groundwork for a scientific working group (of which Blask was a member) appointed by the World Health Organization to add shift work and exposure to light at night to its list of possible carcinogens. Shift workers have been shown to have higher risks for breast, prostate and other cancers.

This year Blask also was invited to brief a group of Congressional staffers on the implications of light pollution on the environment as part of an effort to get the Environmental Protection Agency to address the problem.

“Blask's arrival will help us to further develop our efforts to build a center of excellence in circadian melatonin cancer biology,” said Hill, who hopes to add additional clock-gene scientists to his team in the near future. “There is only one other group in the United States working in this area. As we continue to recruit the best and brightest in this field, Tulane is in a position to become the world's premiere center for research into cancer chronotherapy and cancer prevention.”