Cities of the dead

|
Sally Asher sally@tulane.edu
Print to PDF
Many of New Orleans" tombs are “windowless houses” laid out in even rows with quaint street names. Some are of crumbling brick and broken marble. Others are miniature mansions guarded behind decorative ironwork, with grandiloquent stained glass and angels as their protectors or exquisite totems of grief. Grand or humble, each is a relic of the story of New Orleans. The layout of New Orleans cemeteries, as well as their myriad styles of tombs, earned them the nickname “cities of the dead.” But what is a city without its people? In my new book, Stories from the St. Louis Cemeteries of New Orleans, I reveal the lives of the notable, the notorious, the famous and the unknown that reside within the mysterious and majestic tombs of the St. Louis Cemeteries. 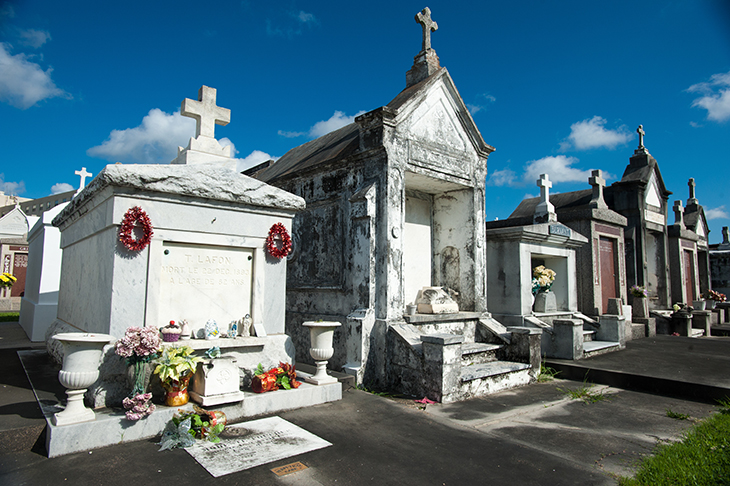 Philanthropist Thomy Lafon"s grave, at left, still receives offerings of thanks for his good deeds. Lafon, who was a free man of color, lived a quiet and frugal existence, but upon his death donated almost a half a million dollars to aid various New Orleans social organizations and charities. St. Louis No. 3. 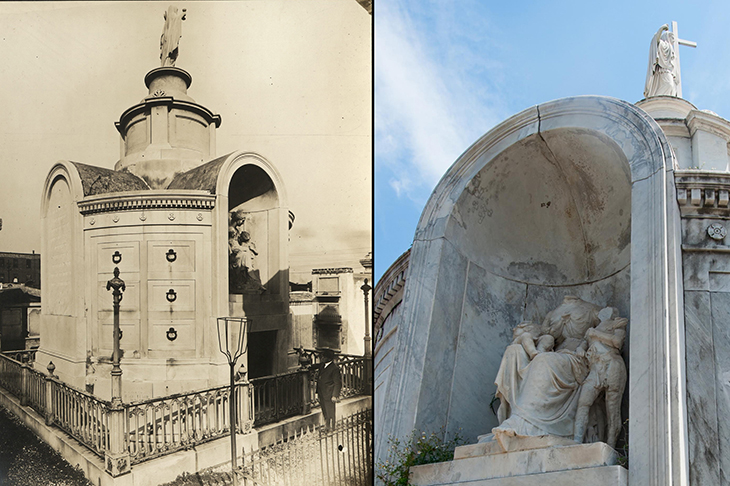 The Italian Benevolent Society Tomb is one of the most famous tombs in St. Louis Cemetery No. 1. It is known as the “Hex Tomb” since its first two residents were its architect, Pietro Gualdi, and the man who oversaw its construction, Joseph Barelli Sr. The tomb also gained unwanted publicity for “starring” in the movie Easy Rider. The photograph on the left (from the Louisiana Research Collection of Tulane University) is one of the few photographs showing “Charity” and her children with their heads intact. 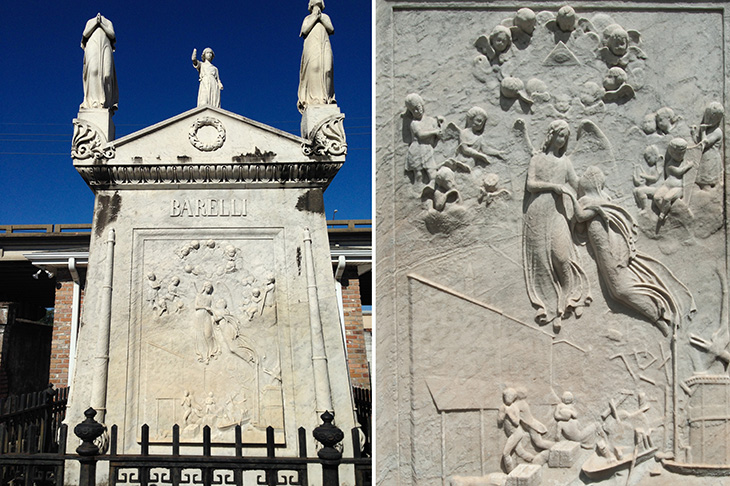 This tomb of Joseph Barelli Jr., who died in in the 1849 explosion of the steamboat Louisiana, was made for him by his father. The tomb, located in in St. Louis Cemetery No. 2., is surmounted by five praying angels and the low-relief panel depicts the steamboat"s explosion as well as young Barelli"s ascent to heaven. 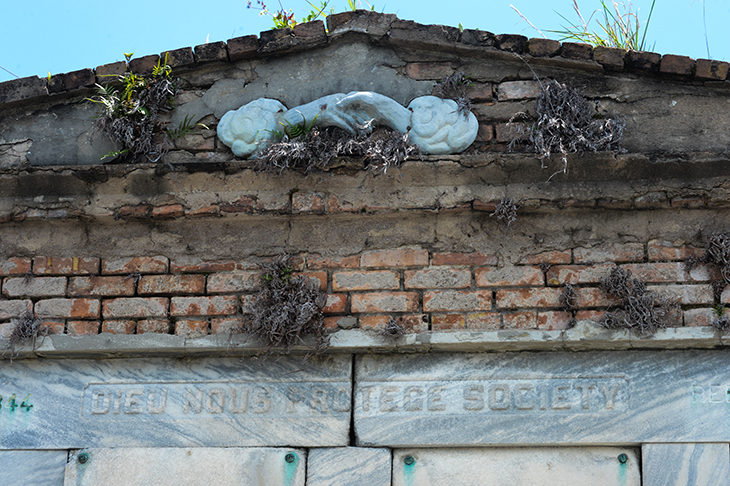 The top of the Dieu Nous Society Tomb, located in St. Louis No. 1, is a 20-vault tomb made primarily of brick and plaster and one of the few African-American benevolent associations that included people from Africa. Clasped hands traditionally symbolize unity and affection. 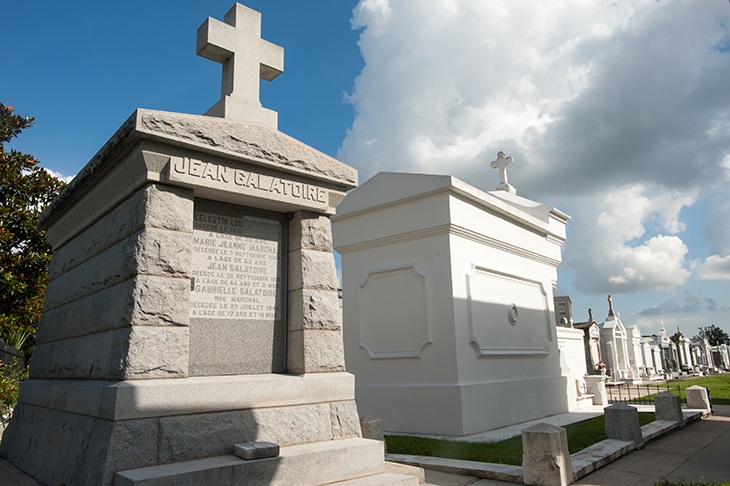 Jean Galatoire, the founder of Galatoire"s restaurant, is entombed in the front of St. Louis No. 3. His tomb, like his restaurant, is the place to see and be seen. Galatoire might have perfected classic French Creole cuisine, but he was also an avid horse-racing fan and is credited with the 1914 restoration of the sport in New Orleans. 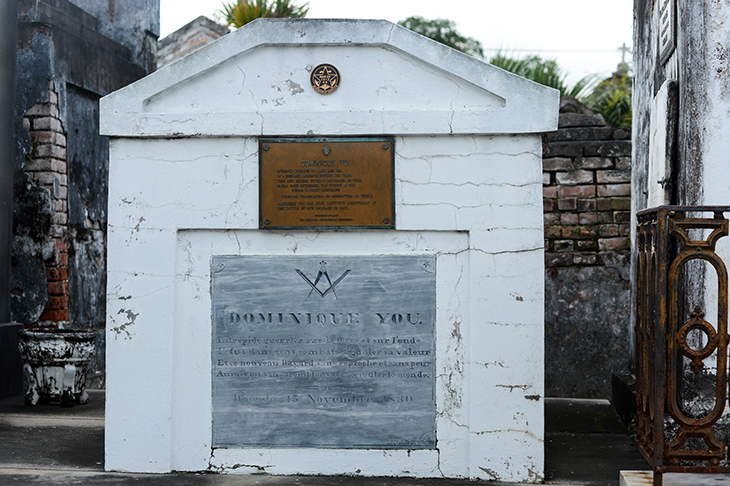 The tomb of privateer and solider Dominique You is located in St. Louis No. 2. Known as the corsair of the South, the terror of the Caribbean and a “hellish banditti,” who sailed with pirate Jean Lafitte, You inspired Andrew Jackson to once say, “Were I ordered to storm the gates of Hell, with Dominique You as my lieutenant, I would have no misgivings.” You died nearly penniless in 1830 but the city gave him a military funeral for his service in the Battle of New Orleans. Every bank and business closed and ships were at half-mast. 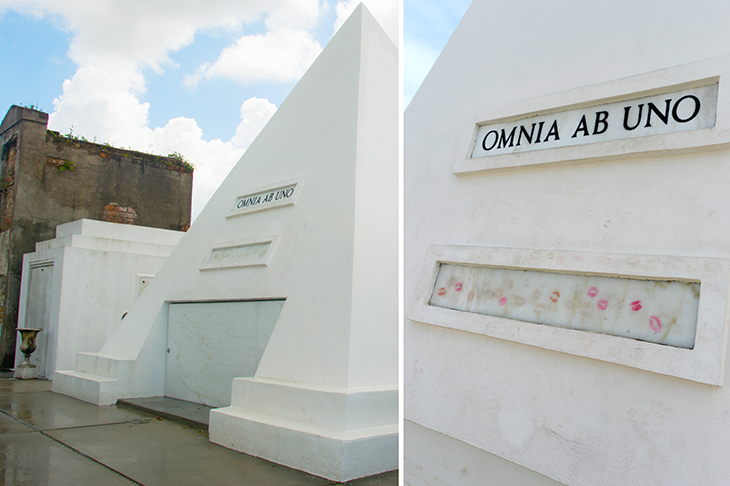 This tomb in St. Louis No. 1 allegedly will be the future resting place for Academy Awardâ“winning actor Nicolas Cage. The Latin maxim Omni Ab Uno means “Everything from one.” Before the Archdiocese of New Orleans limited access to the cemetery in 2015, it was common to find lipstick kisses of various shades adorning the tomb. 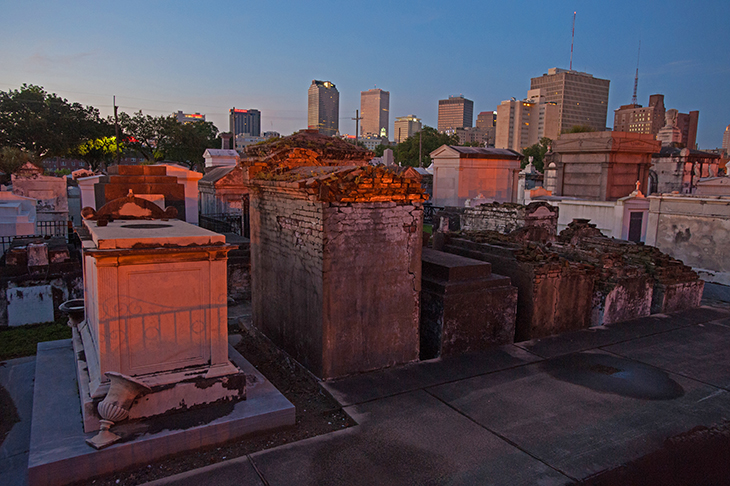 Dawn breaks over the skyline of New Orleans and St. Louis No. 2. The cemetery was almost built with cypress tree groves and large pyramids that would hold three thousand tombs each. The plans called for a flight of steps on the side of the pyramids so visitors could climb the top and sit and enjoy the trees and a monument of the Greek poet Homer that was to be placed in the center of the cemetery. Sadly, the plan did not go through and a more modest plan was adopted.

Staff photographer Sally Asher holds a master"s degree from Tulane University. The History Press Landmarks Series published Stories from the Cemeteries of St. Louis Cemeteries on Oct. 19. Asher will moderate a panel and sign copies of the book at the Louisiana Book Festival at the State Capitol in Baton Rouge, Louisiana, on Oct. 31. Asher also will give a lecture, “Taken to the Grave: Lesser Known Tombs in the St. Louis Cemeteries,” for the Save Our Cemeteries lecture series on Nov. 10 at 6:30 p.m. at Lake Lawn Cemetery, 5100 Pontchartrain Blvd, New Orleans. Asher will sign books afterward. The event is free and open to the public.