Bridget Smith is a matchmaker. Since Hurricane Katrina, hundreds of thousands of volunteers have flooded into New Orleans offering their time and talent to help the city rebuild and recover. Smith, senior program coordinator of HelpNOLA at Tulane University, matches volunteers to jobs that need to be done. 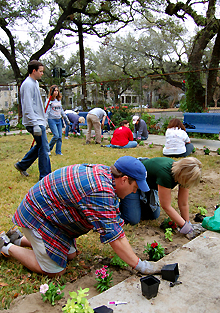 HelpNOLA is a Tulane Center for Public Service program. Although the center is most widely known for overseeing Tulane's public-service graduation requirement, community agencies also approach the center with requests for episodic volunteer assistance.

“We developed the program to address needs that our community agencies were approaching us with that we could not handle through our public-service graduation requirement,” says Vincent Ilustre, executive director of the Tulane Center for Public Service.

“These volunteer needs could be met by episodic volunteerism by other university groups wishing to assist with the recovery, and also by current students, alumni and staff members wishing to lend a helping hand,” he says. “We felt that we could bridge the need with the desire of others, primarily those outside of New Orleans, to assist.”

Smith says that calls continue to come in from corporate entities wanting to incorporate community service into their conferences conducted in New Orleans. For example, when Starbucks Coffee Co. held a conference in the city in the fall, the company deployed 10,000 volunteers.

Attendees to the American Psychological Association meeting in New Orleans in April will provide in-kind donations to the city, among other efforts. And in July, the Evangelical Lutheran Church in America youth gathering will draw 36,000 volunteers to the city for three days of service.

“The reason we can do this so well is that we already have partnerships with 230 agencies, with profiles on each one, many with profiles on our online system,” Smith says. A database on the Center for Public Service website is in progress.

Tulane faculty and staff members often ask to be matched with volunteer assignments, according to Smith. Among the Tulane volunteers is Sharon Courtney, vice president for government affairs. Courtney went to HelpNOLA when a group of government affairs colleagues from other institutions came to New Orleans for a meeting in December.

Members of the Ad Hoc Tax Group, representing a group of universities from across the country who work on tax policy that impacts higher education, wanted to do volunteer work to help a school, and Smith was able to match the group with an ongoing gardening project at Sophie B. Wright School on Napoleon Avenue near St. Charles Avenue.

The gardening project had started when a group of Tulane alumni participating in homecoming in 2007 prepared sod in the school's yard in an area designated as an outside reading garden. The government affairs group followed up on the initial work by spending a day planting flowers.

The need for volunteerism in New Orleans continues to be strong, says Smith.

“After Hurricane Gustav in 2008, lots of work was diverted down the bayou, and now organizations are returning to New Orleans to work,” she says. “New Orleans will continue to need help for years to come, and skilled volunteers are needed now more than ever.”

Smith encourages people wanting to volunteer in New Orleans to gain skills before coming to the city.

Her advice: “Find a carpenter to train you for a day before you come down here,” she says. “You'll be more effective in the work you do.”