Law grad has a ‘lifetime of gratitude’ 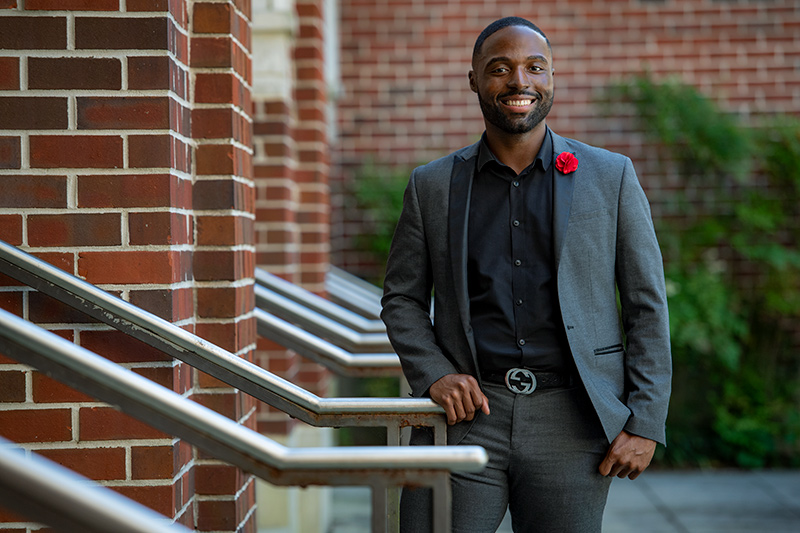 Gerald Williams, who, through sheer perseverance and determination has gotten through the rigors of law school while also battling cancer, joins the Tulane Law School Class of 2019 during Saturday’s graduation ceremonies. (Photo by Paula Burch-Celentano)

There is nothing easy about law school – it’s three years of relentless, demanding workload.

Now imagine attending one of the nation’s most rigorous institutions following a diagnosis — and subsequent treatment — for stomach cancer.

“I thought I would have to drop out or take time off,” said Gerald Williams, who, through sheer perseverance and determination has gotten through the rigors of law school and — cancer-free — joins the Tulane Law School Class of 2019 during Saturday’s graduation ceremonies.

“I didn’t feel like I was in this struggle by myself,” said Williams, who will go on to work in civil rights and employment law in Manhattan after graduation.

Maybe that’s because from the beginning of his ordeal, he never fought cancer alone.

The first sign something was wrong happened the summer he was a rising second-year law student and had to be hospitalized with searing pain — appendicitis, he thought — while studying abroad as part of the law school’s Berlin summer program. “Professor (Jorg) Fedtke visited me every day in the hospital,” he recalled.

Back in New Orleans, he was in and out of doctors’ offices and the hospital. Eventually came an erroneous diagnosis of Crohn’s, a disease that causes inflammation in the digestive system. Although he was being treated for Crohn’s and had changed his diet, the symptoms persisted.

He continued his studies, even on the days he could barely make it to the law school, before the pain in his belly was intolerable. He began to miss classes, and eventually confided in a few classmates about his struggles.

Randolph McKinnie (L ’20) was one of those classmates. He had befriended Williams though a law school mentorship program, where Williams helped the younger student navigate that crucial first year of law school. At first, McKinnie offered Williams rides to medical appointments. But as Williams’ health deteriorated, and when cancer and chemo left him barely able to get out of bed, McKinnie took over — keeping his apartment clean, cooking food, and eventually, managing his care and medicine, too.

Sometimes, “I just sat with him,” McKinnie said. “He was in a dark place. And I just encouraged him to keep going; all these people were counting on him. He was going to make it.”

An entire law school family rose to the occasion. While classmates shared notes and outlines with Williams, the faculty adjusted deadlines and offered extensions and tutoring, and administrators made sure Williams stayed on track. When hospital stays grew longer, there was always someone stopping by to keep him company.

“I found all this love around me, and that got me through,” he said. “Before this experience, it was easy to make an excuse for everything. But life hit me in a way I wasn’t prepared for. And it taught me I could overcome.”

His law school community inspired him, Williams said. In the end, their support will carry him across the stage to his JD. As for his friend, Williams is grateful and humbled by McKinnie’s help and selflessness.

“I have a lifetime of gratitude for Randy, for my classmates and this law school.”