Every Monday this semester, Michael Cunningham sits amid a circle of upper-level undergraduates and leads a discussion on the developmental psychology of New Orleans youth. Each week he asks his students to consider a question that is central to much of his own research: what are the circumstances and influences that allow children to succeed in life? 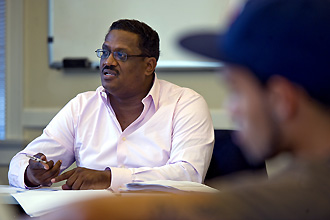 In his course on New Orleans youth, Michael Cunningham challenges undergraduates to consider what influences allow at-risk children to succeed. He is an associate professor of psychology. (Photo by Paula Burch-Celentano)

Cunningham, an associate professor of psychology and Suzanne and Stephen Weiss Presidential Fellow, received a William L. Duren professorship to conceptualize and teach the course, New Orleans Youth: Resilience and Vulnerability in Tomorrow's Leaders. The professorships are awarded each year to faculty to facilitate intellectually rewarding interactions with students.

“Since Katrina, students have had a heightened interest in New Orleans populations,” Cunningham says. “I thought a good way for me to engage students and link my teaching to my research was to teach a course on New Orleans youth.”

Cunningham, who holds a joint appointment with the African and African Diaspora Studies Program, has concentrated his research on how race, gender and socioeconomic factors shape adolescent development.

One goal of the course is to examine the impetus for problem behaviors in New Orleans children and adolescents and evaluate possible methods of abatement.

“The course is focused on resilience versus vulnerability and why some kids are very successful and some kids are notoften times given the same environmental or family context,” Cunningham says.

Research shows adolescents who have an attentive adult in their lives, whether it is a parent or a cousin, are more likely to be resilient in the face of hardship. Longer school days and more after-school programs also lessen the likelihood of problem behavior, according to Cunningham.

Students participate in 20 hours of service learning through the course, which fulfills part of Tulane's public-service requirement.

In addition to tutoring adolescents around the city, Cunningham's students collect data on New Orleans youth. They prepare their findings and then present them in more palatable formats such as pamphlets and brochures for parents and public schools.

“One of the things I stress in the course is the typical developmental processes,” Cunningham says. “What are the normative things [youth] are dealing with? How are things like puberty, and the challenges associated with puberty, exacerbated by poverty? How are things like peer relationships heightened when you have to deal with riding a bus?”

There is no textbook for the class. Instead, Cunningham distributes journal articles that are meticulously reviewed each Monday. He aids the discussion by giving local examples that relate to the scholarship in each article. Regarding research on the influence of neighborhoods on the youths who live in them, for example, he stresses the importance of schools in New Orleans. He explains that here, people don't ask what neighborhood you are from but where you went to school.

Despite the serious nature of the subject matter, laughter erupts often in Cunningham's circle of students. After analyzing a positive correlation or statistical trend, Cunningham will invariably prompt his students to connect the data to the real world.

“Can someone give me an example of how this applies here in New Orleans?”

There's a short, thoughtful pause, then, tentatively, students begin to raise their hands.

Brandon Meginley is pursuing a journalism certificate in Tulane's School of Continuing Studies.