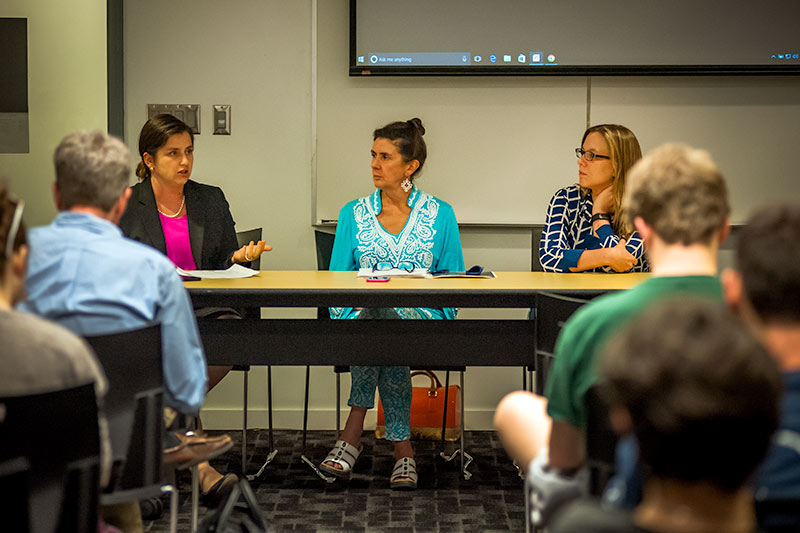 Campaign promises do matter. That’s what a panel of political science professors told a group of students gathered to hear the experts analyze the 2016 U.S. presidential election.

As Election Day approaches on Tuesday (Nov. 8), the discussion presented by the Department of Political Science in the Tulane School of Liberal Arts focused on the public policy positions of presidential candidates Hillary Clinton and Donald Trump.

“When a candidate says, ‘I’m going to build a wall,’ or ‘I’m going to make college tuition-free,’ is that meaningful? The answer is yes.”

Lay explored the significance of campaign trail promises on matters like immigration and education.

“When a candidate says, ‘I’m going to build a wall,’ or ‘I’m going to make college tuition free,’ is that meaningful? The answer is yes,” she said. “It tells you what their priorities are.”

Lay noted a 1980s’ study that looked at campaign promises ranging from the 1910s’ Woodrow Wilson era through the Jimmy Carter presidency (1977–81). It found that each president achieved approximately 73 percent of what they had promised to accomplish.

A president, of course, has to work with Congress to fulfill campaign promises. But Lay said that presidents can work around Congress. For example, Trump’s promise to suspend the Syrian refugee program could be implemented through executive order. And if Congress voted to repeal Obamacare, Clinton would veto such a bill.

A matter that has not received much attention throughout the campaign, said Maveety, is that the next president will fill the vacant U.S. Supreme Court seat.

“This should be a highly salient issue for anyone thinking about which candidate to choose,” said Maveety, noting that federal court appointments are a long-lasting part of presidential legacies.

“Frankly, this has been a very unusual election,” said Maveety.