CNN Anchor to Speak on Campus

In the weeks following Hurricane Katrina, Anderson Cooper's impassioned reporting from New Orleans and the Mississippi Gulf Coast riveted viewers to their television sets. On Tuesday, April 29, the CNN anchor returns to New Orleans to speak at Tulane about those experiences as a kind of exclamation point to the academic year. 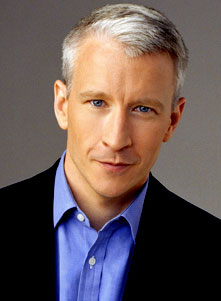 Anderson Cooper puts an exclamation point on the end of the semester. (Photo courtesy of CNN/Eccles)

"Anderson Cooper is speaking on the final day of classes; our goal was to mark the end of the semester," says Tim Clinton, chair of the Tulane University Campus Programming Lyceum committee, which is cosponsoring the event with the Direction Lecture series.

Cooper will speak at McAlister Auditorium on Tulane's uptown campus at 6 p.m. The event is free and open to the public.

Clinton, who took part in negotiating the arrangements to bring Cooper to campus, says his understanding is that Cooper will not only his share his Katrina-related experiences with the audience, but will encourage students to develop an interest in news and current events.

"A good proportion of the student body knows who Cooper is and will come out," says Clinton. "I look forward to a packed event in McAlister."

Cooper, who has reported on natural disasters, famine and war across the globe, has been both lauded and criticized for his raw, emotional reporting during the immediate aftermath of Katrina.

In a memorable moment of television journalism, Cooper cut short U.S. Sen. Mary Landrieu of Louisiana as she was thanking federal officials for their recovery efforts.

"Excuse me, senator, I'm sorry for interrupting," said Cooper during a live interview on Sept. 1, 2005. "For the last four days, I've been seeing dead bodies in the streets here in Mississippi. And to listen to politicians thanking each other and complimenting each other, you know, I got to tell you, there are a lot of people here who are very upset, and very angry, and very frustrated."

Cooper, who has regularly returned to New Orleans to follow up on the city's recovery, has said that it was his reporting on Hurricane Katrina that prompted him to write Dispatches From the Edge, a behind-the-scenes account of reporting on that tragedy as well as the Asian tsunami, the war in Iraq and starvation in Niger.

"I was worried that one day people would come and forget what actually happened [in New Orleans]," Cooper said in a 2006 article published on CNN.com. "It would only end up being the police and the citizens who were actually there, in New Orleans and the Gulf Coast, who remembered ... It's important to not let the slate be wiped clean. I started writing down all the things behind the scenes, which we couldn't get on television."