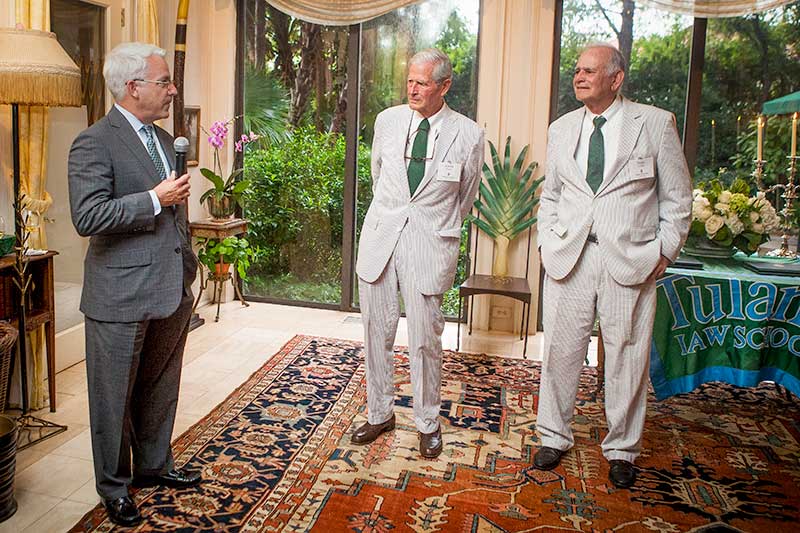 The eclectic décor at James “Jimmy” Coleman Jr.’s home on Audubon Place near the Tulane University campus reflects a broad appreciation of the world, from the photos of British royalty who’ve visited to the risqué Medusa sculpture from Venice.

James Coleman Sr., a lawyer-turned-businessman, celebrated successes by taking his four children abroad, so they shared “his enthusiasm for being abroad and understanding people with other ways of life,” said his son Jimmy, a 1968 Tulane University Law School graduate.

For years, James Coleman Sr., a 1937 Tulane Law School graduate with a Tulane liberal arts degree, hosted international students at his home. After he died in 2007, his family established the James J. Coleman Sr. Visiting Professorship in Law, which enables the law school to invite distinguished legal scholars from around the world to teach advanced short courses.

“My dad was probably the truest of all Tulane fans.”

Brothers Jimmy, Peter (L ’70) and Thomas Coleman recently doubled their gift for the professorship to $1 million. And to renew the tradition of student visits, Jimmy Coleman opened his home to the 2016 class of LLM and international students in August.

At the event, Tulane President Michael Fitts called the university “unbelievably indebted” to the Coleman family.

At the law school, he helped found the People’s League along with classmates such as Marian Mayer Berkett, who became the first woman hired by a New Orleans law firm, and Hale Boggs, who rose to U.S. House majority leader.

“We were raised to be Tulane fans from the beginning,” Peter Coleman said. “My dad was probably the truest of all Tulane fans.”