Homecoming  it's usually a high point of the fall football season, when alumni return to reconnect with friends and cheer on the Green Wave. But this year's celebration goes well beyond the expected events. President Scott Cowen calls this a “pivotal moment” to celebrate the spectacular success of the largest fund-raising campaign in the university's 174-year history. 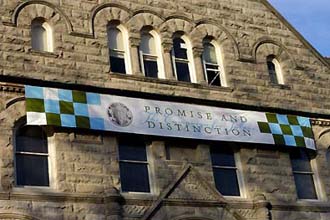 During homecoming, Tulane is celebrating the successful conclusion of “Promise and Distinction: The Campaign for Tulane,” which brought in $730.6 million in gifts from alumni and friends. (Photos by Paula Burch-Celentano)

Cowen will take the stage in the Kendall Cram Lecture Hall on Friday (Oct. 3) at 10:30 a.m. to lead a town hall meeting and discuss the campuswide impact of “Promise and Distinction: The Campaign for Tulane,” which raised $730.6 million.

Of course, the weekend also will include the Tulane football game against Army on Saturday (Oct. 4) at 2 p.m., outdoors at City Park's Tad Gormley Stadium. And alumni from around the country will gather on the uptown campus on Friday for a reunion party at the LBC's Qatar Ballroom, followed by fireworks and a free concert on the quad by New Orleans-own Funky Meters.

Much of the support for the “Promise and Distinction” campaign came from Tulane alumni, according to former Board of Tulane chair Cathy Pierson, who, along with husband Hunter, chaired the campaign.

“I am very excited to say that of the more than $730 million we raised, $316 million of that was raised by our alumni. This shows the dedication and commitment of this group to the mission of Tulane,” Pierson said.

The fact that many of the Friday events center on the LBC is indicative of the campaign's success. The renovated and expanded student center is one of the key elements of the “Promise and Distinction” campaign, made possible by substantial gifts from alumna and Board of Tulane member Carol Bernick and the Bernick and Lavin family. The family also donated funds to create the Cowen Institute for Public Education Initiatives. 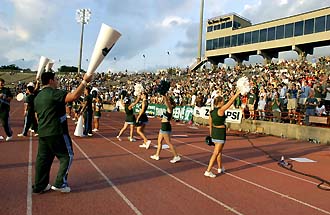 For the first time since 2004, the homecoming football game will take place outdoors in City Park's Tad Gormley Stadium. The Green Wave will play Army on Saturday (Oct. 4) at 2 p.m.

Luann Dozier, who leads the Tulane fund-raising staff that worked to surpass the $700 million campaign goal, sees it this way: “There's no better time to wrap up the campaign than homecoming, with alumni, students, parents, faculty and staff, and friends all in on the celebration.”

She added, “The campaign was always less about the dollar amount and more about the impact of what those dollars meant to the university. And at homecoming everyone can see and feel that impact for themselves.”

A total of $93.5 million of the raised funds was dedicated to improving student housing; the LBC and Greer Field at Turchin Stadium; and a new addition to the A. B. Freeman School of Business. Through the fund-raising, the Tulane endowment reached the $1.1 billion mark. Only 76 universities in the country have endowments that large.

More than $297 million of the campaign's total was earmarked to support chairs, professorships, scholarships, fellowships, research, scholarly travel, internships, athletics and libraries. Through new support generated by the campaign, the number of endowed chairs and professorships grew from 153 to 331.

Highlights of the campaign gifts include donations from the Carnegie Corp. and the Parents Council to support the Center for Public Service; a gift from Dr. Jim Doty to support medical scholarships and establish an endowed chair in medicine; a bequest from the estate of Lallage Feazel Wall that led to numerous new projects; funding from the Qatar Katrina Foundation for scholarships and neighborhood health clinics; and donation of the former Murphy Exploration Building in downtown New Orleans for use by the School of Medicine.

To further celebrate the philanthropic success, some 50 individuals and organizations will be inducted on Friday into the Paul Tulane Society, which honors those who have donated $1 million or more to the university.

“This is a pivotal moment in the long and distinguished history of Tulane University,” Cowen said. “We are poised to further elevate our place among the most distinguished and distinctive universities in the nation in terms of education, research and community service programs. This is a transformative time for our university, our city and state.”