We can, with great assurance, count on a highly lethal form of influenza to spread across the globe sometime in the future, said John Barry on Thursday (Dec. 4) at the opening session of the university's 2008 Presidential Symposium, “Infectious Diseases and Global Risks.” 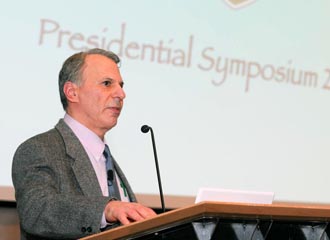 Drawing from material he gathered in writing his highly acclaimed book, The Great Influenza, John Barry says the lessons learned from the past are critical in preparing for future pandemics. (Photos by Tracie Morris Schaefer)

Just as the “Big One” will one day rock California and some poor city on the Gulf Coast will again be visited by a killer storm, we can expect a pandemic. How we will respond to the next catastrophe is largely a matter of how well we absorb the lessons from the past, Barry said.

Drawing from material he gathered in writing The Great Influenza, a study of the 1918 pandemic that killed upwards of 50 million people, and current research in epidemiology, Barry delivered a cautionary message that explored the interrelationship between science, medicine, politics, public policy and social psychology.

He spoke at the Freeman Auditorium in the Woldenberg Art Center on the Tulane uptown campus.

In 26 weeks during 1918â“1919, influenza killed more people than AIDS has killed in 26 years, said Barry. And it did so in brutal fashion. Reading from a letter written by an Army physician witnessing the deaths of a hundred soldiers per day, Barry gave an account of symptoms that included “a vicious type of pneumonia” that turned patients dark blue from oxygen deprivation, caused bleeding from the eyes and nose and resulted in death within 24 hours.

Tragically, said Barry, in the United States, government officials insisted that the outbreak was nothing more than the ordinary seasonal variety.

“The disconnect between what the public authorities were saying to keep up morale and what people were experiencing in their own lives quickly became counterproductive,” said Barry. “Trust broke down and, frankly, in some cases, society broke down.” 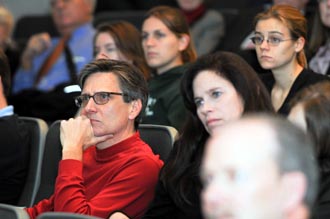 Not all pandemics are as deadly as the one of 1918, but even a relatively mild one can have catastrophic effects on public health, the economy and society in general, said Barry, who explored another kind of catastrophe in the bestselling Rising Tide: The Great Mississippi Flood of 1927 and How It Changed America.

He serves on a federal government Infectious Disease Board of Experts and has advised federal, state and World Health Organization officials on influenza, crisis management and risk communication.

From his research, Barry said that other than an effective vaccine, communication is the best way to counter the next pandemic. “It is important that authorities tell the truth. Don't manage it, tell it.”

In terms of nonpharmaceutical intervention, Barry unequivocally said that research shows that “quarantine is worthless.” There also is little evidence that closing schools and wearing masks are effective interventions, he said.

“Hand washing,” said Barry. And effective planning. But as New Orleanians know, “planning does not equal preparation,” said Barry. “Katrina was one of the most planned-for hurricanes you can imagine.”

Barry's lecture was followed on Friday (Dec.5) by the symposium's scientific program, including the science keynote address  the Lillie and Bennie Lazzara Lecture  delivered by Rita R. Colwell, an environmental microbiologist and scientific administrator. Colwell's address was “Climate, Oceans, Infectious Diseases, and Human Health: Cholera as the Paradigm.”