Every commencement is a milestone for the graduate. Its pageantry signifies a validation of effort, certification of success and, perhaps, the first serious farewell to childhood. In this respect, the 2009 Tulane University commencement on Saturday (May 16) will be no different than any other. It will, however, also be a poignant milestone for the institution, says Tulane President Scott Cowen. 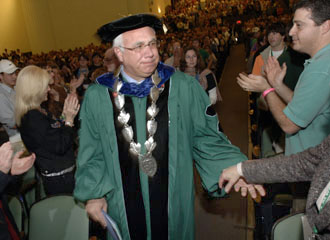 In January 2006, an emotional Scott Cowen greets an overflow crowd of parents and students at a convocation ceremony celebrating the university's reopening after Hurricane Katrina. (Photo by Paula Burch-Celentano)

“For some time it has felt to me that the graduation of this class would symbolically mark the next big chapter in the university's future, one in which every student who arrives here will know about Katrina, but it will be history for them,” Cowen says.

For those graduating from Newcomb-Tulane College and the School of Medicine, their time at Tulane was set into motion and shaped by the storm, which took aim at New Orleans at the beginning of the 2005 fall semester.

“I can remember so vividly standing up in McAlister Auditorium on Aug. 27, telling everyone they had to go home for a 'few days,'” says Cowen.

As it turned out, it would be months before those students set foot on campus again, and during the anxious weeks of September and October 2005 Cowen couldn't be certain that they ever would.

“I wondered whether we would survive from the devastation of Katrina,” says Cowen. “And even if we did survive, would it take so long to recover that the students would abandon the university and go someplace else.”

There's another memory that involves McAlister Auditorium. This one is about the convocation that marked the opening of school for the spring semester on Jan. 16, 2006  “Walking into McAlister with the faculty in robes, and just the pure joy and happiness of seeing the students, hearing the standing ovation and being blinded by the bulbs going off.”

Cowen says that at that moment he knew the university would all right.

“I remember thinking that four years from now I'll be at this class's commencement  and won't that be a joyous occasion.”

That the students chose to come back is a tribute to their “basic goodness,” says Cowen. “I think we tapped all the good things there are about young people  their exuberance, in many ways their naivetÃ©, and their great desire to make a difference in the world.”

Every commencement demands that time be taken to reflect on both the past and future. Though the memories from these last few years will always be with him, Cowen says he's more inclined to look to the future.

“I don't think you ever get past it,” says Cowen, referring to the storm and its consequences. “And the fact of the matter is I do think about it every day. But I find myself each year getting back into more of a routine that reflects what it was like before Katrina. And that feels good.”