Community activists have to be persistent 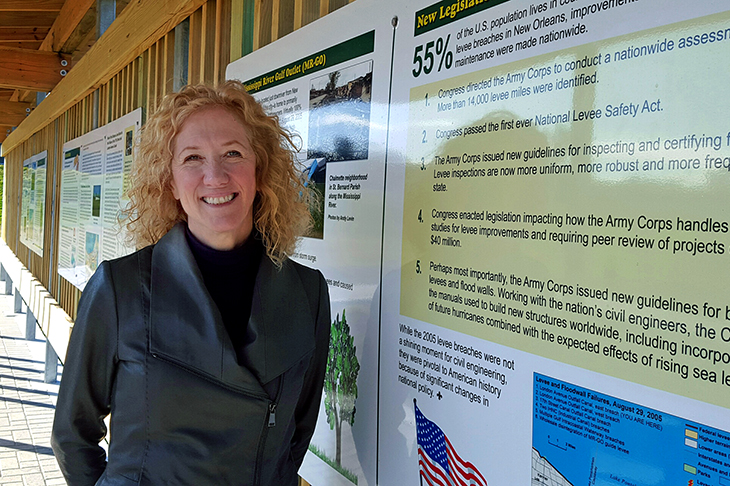 The founder of Levees.org after Hurricane Katrina, Sandy Rosenthal is pictured above at the Levee Exhibit Hall and Rain Garden located at the east breach site of the London Avenue Canal. She spoke to members of the American Business Women’s Association on Thursday (April 7), encouraging them to take on the challenges of community activism. (Photo from Levees.org by Joan Judycki)

When Sandy Rosenthal spoke about leadership skills to a New Orleans women’s organization on Thursday (April 7), she issued a call to action from her own experience: “If I — someone with no experience that didn’t know anything about levees — can take on the federal Corps of Engineers, all of you can take on community issues.”

A 1981 Tulane alumna with an MBA from the A. B. Freeman School of Business, Rosenthal is the founder of Levees.org and is often called one of the heroes of the recovery from Hurricane Katrina. She spoke on “Becoming an Organizer in Your Own Community” to the Crescent City Connections Express Network of the American Business Women’s Association.

She created Levees.org, which had its beginnings as “me and my 15-year-old son at a card table in Lafayette (Louisiana),” to educate the American public about the cause of the levee failures and catastrophic flooding in New Orleans during Hurricane Katrina.

“Anger is actually a good motivation to start something if you channel it in positive ways.”

“The Corps of Engineers built the levees, but when the levees broke, we were being blamed,” Rosenthal said. “They almost got away with it.”

Persistence pays in community work, Rosenthal said — “You have to stick with it; don’t give up.” She was introduced to the ABWA group as someone “who holds onto things like a tiger.”

Rosenthal had other advice for the women business leaders. She encouraged them to get over any fear of public speaking; to be sensitive to other people’s points of view (“Listen to them, find out where they’re coming from”); to be a good time manager; and to believe in themselves. Rosenthal, who became an expert on levees by reading voraciously, encouraged them to “develop a thorough knowledge of your field.”

Using stress management techniques such as frequent exercise and “learning to take care of yourself” are other keys to success in leading community activism efforts, she said.