The change of presidential administrations in January will open the way for corporate boards to recruit Bush administration cabinet officers and departing members of Congress to serve as directors. But the migration from Washington to America's corporate boardrooms will be more limited in the next year or two than in the past, according to a study in the Academy of Management Journal co-authored by Tulane faculty member Albert A. Cannella Jr. 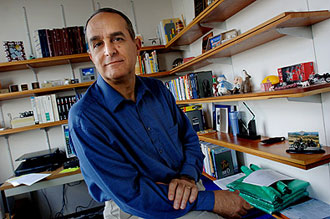 Tulane business professor Albert “Bert” Canella Jr. is among the co-authors of a study looking at the change of administrations in Washington and its impact on leadership in corporate America. (Photo by Paula Burch-Celentano)

“Our evidence suggested that when the opposition party is in control of the White House and both houses of Congress, there is about a 30 percent decline in the likelihood that former officials will join boards,” says Cannella, who carried out the study with Richard H. Lester and Asghar Zardkoohi of Texas A&amp;M University, and Amy Hillman of Arizona State University.

Cannella holds the Earl P. and Ethel B. Koerner Chair in Strategy and Entrepreneurship in the
A. B. Freeman School of Business at Tulane.

In addition to being a handy primer for the soon-to-be-unemployed, the study, “Former Government Officials as Outside Directors: The Role of Human and Social Capital,” is among the first to quantify just how fast the revolving door between business and government spins  and, for political losers, how suddenly it can slam shut.

The political exclusion, the researchers stress, has to be complete for this effect to occur. As the study puts it, “Only when the former official's party is completely out of power is there a significant depreciation in the value of the individual's human and social capital as it relates to obtaining outside directorships.”

But when a party is in power, those in its membership who tend to benefit, the study finds, have been cabinet officers. Other factors being equal, they were more than twice as likely as former senators, and more than five times as likely as former representatives, to be appointed corporate directors during the 16 years covered by the research, 1988 through 2003.

Historically, former government officials have been prized by the corporate world because they typically possess resources such as knowledge of how Washington works, contacts and expertise in specific arenas such as commerce and transportation. Cannella cautions, however, that the past may not reflect the future and officials leaving office this term may do better than those in the past have done.

“The world of commerce  and Washington  of the past eight years has been much more free-market and free-wheeling in nature. In this kind of environment, it could be that the appointment to boards after government service is more 'payment for services already rendered' than attempts to draw on current expertise,” says Cannella.

The current administration and Congress, says Cannella, have enabled a good deal of deregulation and have outsourced to private firms services that used to be rendered by the government.

“While I'm not accusing anyone of anything  and can prove even less  I don't think we need to keep our minds closed to the possibility that some board appointments are more payoffs than investments.”

Cannella joined the Tulane faculty in the fall of 2007.