Build safer, stronger and smarter. That was the mantra heard in south Louisiana in the aftermath of Hurricane Katrina. It reflected the opportunity presented to area homeowners as they rebuilt storm-damaged homes  to make their homes more energy-efficient and sustainable even as they are being built to withstand the area's unique environmental challenges. 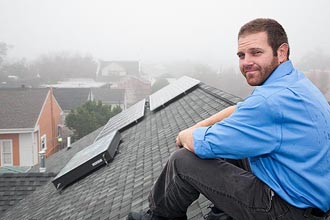 “I want to see the best for the people of the New Orleans. I want people to be educated about all of the options they have when building,” says Tulane alumnus Patrick Ibert. (Photo by George Long)

Unfortunately, when people started rebuilding their residences, they had little to choose from other than the traditional wood-framed home. Tulane alumnus and New Orleans native Patrick Ibert saw an opportunity and returned home from New York to attempt to fill the void.

Ibert is the owner of Green Door Construction, a company that uses engineered material as an alternative to the traditional wood-frame method of construction.

The company was born of family tragedy, says Ibert. In the days following Katrina, a fire consumed his parent's home in the Lower Garden District. Taking on the role of general contractor, Ibert decided to use 21st-century technology to rebuild his parents' 19th-century Greek Revival home.

“I wanted to rebuild it out of material that was going to be fireproof and termite proof so that it wouldn't have the same problems it had before,” says Ibert, who holds both undergraduate and graduate degrees in engineering from Tulane.

The material Ibert chose for the exterior walls was Autoclaved Aerated Concrete, a precast concrete block that is sustainable, efficient and virtually impervious to fire and termites.

It's a technology Ibert believes is well-suited to New Orleans.

“I think homeowners want something new and something better because they've seen what happens,” Ibert says. “They've seen their stick frame homes blow away or get mold.” Noting that there also are energy-efficiency problems associated with traditional materials, Ibert says, “The problem is that the construction industry has not adopted the new materials that are available.”

Despite being what Ibert calls “a superior product,” AAC has only elicited tepid interest from homeowners and builders since he started Green Door.

“It really comes down to consumer and contractor education,” Ibert says.

Although Ibert calls AAC a “new” building material, he says it has been in use in Europe for decades, but hasn't made the jump across the Atlantic. Ibert says the high cost of wood in Europe forced builders to try new technologies and he expects that high-energy costs and increasingly strong storms will eventually force Americans to embrace something different.

Ibert admits there is a drawback to using AAC.

“It will cost anywhere from 10 to 15 percent more,” says Ibert. “But I hesitate to make that cost comparison because the quality of the product is so much different.”

He points to the energy savings, saying the initial difference in costs will be recouped throughout the life of the home.

Ibert is hoping that in using his parents' house as an example he can convince New Orleans residents to consider other possibilities when designing and building new homes.

“I want to see the best for the people of the New Orleans,” says Ibert. “I want people to be educated about all of the options they have when building. As long as the consumer doesn't demand a product, the industry is never going to change.”