Conference Looks at Slavery's Past

Ruby Bridges, who became a symbol of the civil rights movement when as a 6-year-old in 1960 she integrated the all-white William Frantz Elementary School in New Orleans, will be among the participants marking the 200th anniversary of the ending of the transatlantic slave trade at a special UNESCO/USA-sponsored gathering at Tulane University. 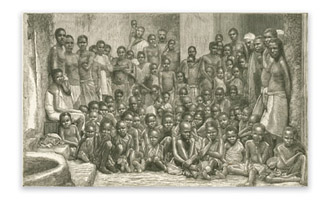 Africans rest after rescue from a slave ship by the British navy in the 19th century. Both Great Britain and the United States abolished transatlantic slave trading in the early 1800s. (Image courtesy of the Mariners' Museum, Newport News, Va.)

“Prelude to Freedom: The Ending of the International Slave Trade,” is an afternoon of performances and presentations open to the public on Wednesday (June 25) from 3 until 6 p.m. at Chadwick Auditorium, room 131, Goldring/Woldenberg Hall 1, on the uptown campus.

“Prelude” is the public event of the UNESCO (United Nations Educational, Scientific and Cultural Organization) Transatlantic Slave Trade Education Project international conference that is being hosted by Tulane June 23â“28.

Bridges will be honored by Tulane and UNESCO's Transatlantic Slave Trade Education Project/USA. The meeting marks the bicentennial of the 1808 decision by the United States to join Great Britain in abolishing transatlantic slave trading. Great Britain had banned the practice in 1807.

“This weeklong conference will bring educators from schools and universities throughout the United States and Europe to engage in workshops and visits to sites that have special relevance for the history of slavery,” says conference organizer Sylvia Frey, professor emerita of history.

“The bill signed by President Thomas Jefferson did not end slavery, but it is a milestone in the long struggle to end 'the merchandizing of men,' as one antislavery writer put it. The conference both commemorates the ending of the international slave trade and pays tribute to the people of New Orleans in their struggle to recover from the devastating effects of Katrina.” 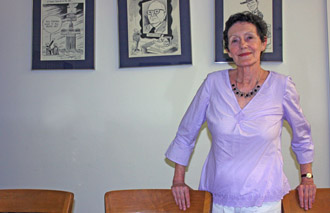 Sylvia Frey, professor emerita of history, is organizing a conference on “Prelude to Freedom: The Ending of the International Slave Trade” for educators from schools and universities throughout the United States and Europe. (Photo by Tricia Travis)

Frey, who joined the Tulane faculty in 1969, has organized several conferences and symposia. She was a co-founder and co-director of the National Endowment for the Humanitiesâ“supported Deep South Regional Humanities Center.

She specializes in Colonial and revolutionary America, U.S. political traditions and institutions and women and religion in pre-industrial America.

Among her books are Water from the Rock: Black Resistance in a Revolutionary Age and From Slavery to Emancipation in the Atlantic World (Studies in Slave and Post-Slave Societies and Cultures).

The June 25 program is free and open to the public, and features internationally known speakers from Europe, Africa and the United States. In addition to the appearance by Bridges, the speakers include:

â¢ Leif Svalesen, a Norwegian writer and one of the divers who discovered and excavated the wreck of the Danish-Norwegian slave ship Fredensborg
â¢ Prize-winning poet and storyteller Nikky Finney, professor of English at the University of Kentucky
â¢ Kofi Anyidoho, poet, performer and filmmaker and professor of literature and director of the School Performing Arts at the University of Ghana
â¢ Sylvaina Diouf, director of the Schomburg-Mellon Humanities Institute, author of Dreams of Africa: The Slave ShipClotilda and the Story of the Last Africans Brought to America.

For additional information on “Prelude to Freedom: The Ending of the International Slave Trade,” contact Frey at 504-891-1294.

In conjunction with the conference, The Amistad Research Center at Tulane will present an exhibition.