The long-awaited kickoff of construction for the new Louisiana Cancer Research Center officially takes place today (April 15) with a ceremony at the site in downtown New Orleans at Tulane and South Claiborne avenues. 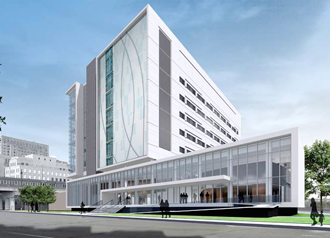 The architect's rendering shows the Louisiana Cancer Research Center, a new research facility that will optimize collaboration and productivity among scientists. The building was designed by RMJM Architects, headquartered in the United Kingdom.

A massive piling on the site will be signed by representatives from Tulane University and the other major partners of the Louisiana Cancer Research Consortium (LCRC), the Louisiana State University Health Sciences Center and Xavier University, along with state and local dignitaries and several cancer survivors.

The LCRC, a collaboration of the three universities' health sciences programs, offers access to technologies, services and scientific consultation that enhance scientific interaction and productivity.

The bricks-and-mortar cancer center has been on the drawing board for most of the past decade, with design of the 10-story, 175,000-square-foot structure completed shortly after Hurricane Katrina by RMJM Architects, a global design firm headquartered in the United Kingdom.The firm partnered with Lyons and Hudson Architects.

“It has been a long time coming, but the project is definitely on course now,” says Steven Moye, president and CEO of the Louisiana Cancer Research Consortium, which will operate the facility. “It is the first of many state-of-the-art medical facilities planned for the city, and it will pioneer breakthrough advances in detection, treatment and prevention of cancer while fostering economic development in downtown.”

The research center will be located in what is known as the Greater New Orleans Biosciences Development District. 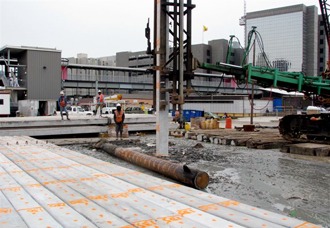 Preparation work has been under way at the site of the new building in downtown New Orleans at Tulane and South Claiborne avenues.

Funding for the cancer center comes largely from the 2002 legislative session in which then-Rep. Mitch Landrieu led the charge to dedicate three cents of the tobacco tax to fund infrastructure and cancer research development for the consortium. The Louisiana legislature approved $102 million for planning and construction in 2007.

“The LCRC has always been an ambitious enterprise, bringing together the best and the brightest cancer researchers and caregivers for the benefit of the citizens of Louisiana,” says Prescott Deininger, LCRC co-director and interim director of the Tulane Cancer Center. “This new building will allow us to reach our full potential in terms of synergistic interactions between our various research programs, which are exploring the biology of cancer and developing new therapeutic targets and treatment options.”

The new center provides a physical focal point for what is already happening in the consortium, according to Dr. Benjamin Sachs, dean of the Tulane School of Medicine and chair of the LCRC.

“We already utilize a system of core research facilities that provide state-of-the-art technologies necessary to assist researchers in their work,” Sachs says. “Core equipment and services facilitate research across programs, but this will give us the opportunity to do that under one roof.”

Three of the floors of the building being constructed by Brice Construction will be dedicated to cancer research laboratories for LCRC's immunology, molecular signaling and molecular genetics research programs. One floor will house LCRC's executive offices and a vivarium. A large theater-style meeting facility will be located on the first floor. The remaining floors will be flexible spaces for future growth as laboratories, offices or clinical services. Construction of the building is expected to be complete in 2012.