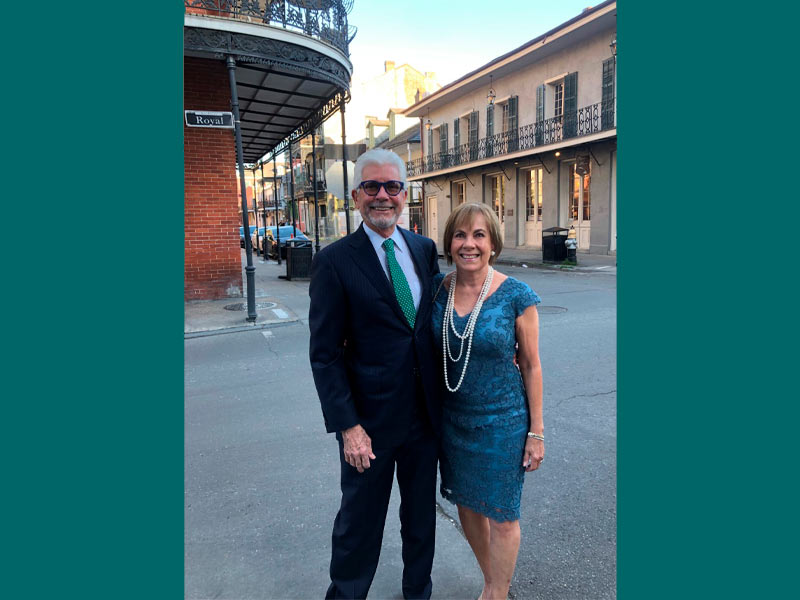 Cheryl A. Verlander (NC ’70, SW ’75) and her husband, Charles “Chuck” N. Bracht, have made a $1 million bequest to Tulane’s Verlander-Bracht Scholarship Endowed Fund, which they created in 2008 to support students who are pursuing master’s degrees at the School of Social Work. (Photo courtesy of Cheryl Verlander and Chuck Bracht)

A Tulane University alumna who has dedicated her life to counseling patients with mental illness is now giving back further to the university with a $1 million bequest to the School of Social Work.

The estate gift from social worker Cheryl A. Verlander (NC ’70, SW ’75) and her husband, Charles “Chuck” N. Bracht, will bolster the Verlander-Bracht Scholarship Endowed Fund, which they created in 2008 to support students, especially Tulane alumni, who are pursuing master’s degrees at the School of Social Work.

A New Orleans native and longtime Houston resident, Verlander practices at the Hauser Clinic. She has forged an extensive career in the public, private, nonprofit, and for-profit health and mental health sectors. She also has been a field instructor for graduate students in social work, counseling, and marriage and family therapy. She is a Board Certified Diplomate of the American Board of Clinical Social Work and a member of both the Academy of Certified Social Workers and the Tulane Social Work Dean’s Advisory Council.

“The Tulane School of Social Work provided me with the education and clinical experience that facilitated my long and rewarding career. I was fortunate to be able to accomplish all of my goals, and more, in my professional life,” Verlander said.

“I really would like the scholarship to educate mental health professionals. Social workers do the lion’s share of mental health work, and I want to help further educate people to fill that need. A major psychiatric illness ran in and touched all my family, so I wanted to make a difference by helping others facing the same struggles,” she said. “I hope that I have made a difference with patients, families, and systems during my professional life, and this gift is to help subsequent generations continue.”

Tulane President Michael A. Fitts noted that the gift arrives as the demand for social workers is increasing.

“With the difficulties brought on by the COVID-19 pandemic over the past two years, as well as other stressors such as economic uncertainty and the continued mental health crisis in our country, the need for social workers is urgent and growing,” Fitts said. “We are so grateful for the longtime support Cheryl and Chuck have provided to Tulane and for this latest gift that will educate a new generation of social workers to help heal a hurting world.”

“Cheryl and Chuck’s affinity for the school and our students is heartfelt,” he said. “Their scholarship gift will provide outstanding opportunities for other social workers to follow in Cheryl’s footsteps and make a difference in behavioral health in medical centers as well as local community clinics. This gift will be a lasting legacy built upon the phenomenal career of Cheryl.”

Verlander was inspired to support Tulane after Hurricane Katrina devastated Tulane and New Orleans in 2005. She was also motivated by the philanthropic support of her husband Chuck Bracht, a vice president at NFP Executive Benefits, who has donated to his alma mater, Rice University, since graduating in 1969.

After Katrina, Verlander decided it was time “to shift more of our estate to Tulane,” and established the Verlander-Bracht Scholarship. Since then, the couple has also have supported Newcomb-Tulane College, the schools of Architecture and Science and Engineering, the Green Wave Club, and other areas of the university.

They also became more active leaders at Tulane, joining the President’s Council where they still serve today. In addition, they are members of the Houston National Campaign Council, which supports Only the Audacious, The campaign for an ever bolder Tulane. Cheryl also has served on the Tulane Fund Advisory Board and several of her class reunion committees. Cheryl’s daughter, Marisa, graduated with a bachelor’s degree from Tulane School of Architecture in 2005.