The Tulane Jewish Studies Program is offering a course this semester that provides two scholarly takes on Jewish history. 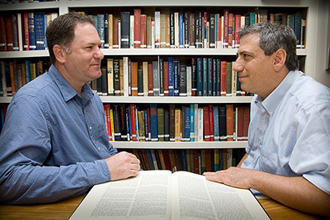 Moshe Naor, left, a visiting professor from Israel, and Brian Horowitz, director of the Jewish Studies Program at Tulane, are co-teaching “Power in Jewish History.” (Photo by George Long)

“Power in Jewish History” is co-taught by Brian Horowitz, director of Jewish studies, and Moshe Naor, the Schusterman Visiting Professor of Israel Studies. Horowitz's area of expertise is Eastern European Jewry, while Naor, an Israeli native who holds a doctoral degree from Hebrew University, focuses his inquiry on Israeli history.

The course examines the idea of power in Jewish history, focusing on aspects of political, social and military power from the ancient world to the present. The main idea is to challenge the conventional arguments regarding Jewish power and powerlessness.

By discussing the representation of events in the past, such as the great revolts in the Second Temple Period or the martyrdom in the Middle Ages, the professors reinterpret traditional Jewish sources and compare them to the ideology of Zionism and rabbinic Judaism.

“What is power and what is passivity isn't always obvious,” says Horowitz. The professors explore the extent to which Jewish notions of martyrdom and messianism may be aspects of strength rather than weakness. Employing the memory of religious and secular holidays to show the connection between identity and national sovereignty, Naor notes that what Zionism chooses to remember and to forget characterizes the importance of power in Israeli society.

There is even a lesson to be learned in examining how Hanukkah has been celebrated over the ages. The traditional story tells about a religious miracle involving reconsecration of the Second Temple in Jerusalem. In contrast, the Zionist take on the story stresses the triumph of the Maccabees whose struggle for liberation over much larger forces is a source of national pride and a symbol of heroism.

Both professors have new books coming out in the near future. Horowitz's forthcoming book on Eastern European cultural autonomy discusses the development of philanthropic, educational and cultural organizations that he asserts developed so Jews would have a sense of control over their own destiny. Naor's upcoming book focuses on the 1948 Israeli War of Independence and the mobilization of all segments of Jewish society to support the war.