The national spotlight is shining once again on Tulane University, its president and the civic engagement programs that have been a major focus of its students and faculty members since Hurricane Katrina. 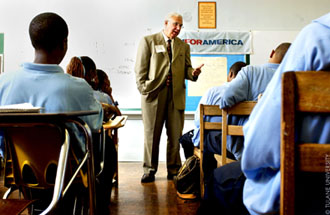 In naming honorees for its prestigious Academic Leadership Award, Carnegie Corp. cited Tulane President Scott Cowen for being an exceptional leader who transformed crisis to opportunity for Tulane and New Orleans after Hurricane Katrina. (Photo by Paula Burch-Celentano)

The Carnegie Corp. of New York is awarding Tulane President Scott Cowen its prestigious Academic Leadership Award, along with a $500,000 grant that Cowen will dedicate to a universitywide set of initiatives in civic engagement, including public education and social entrepreneurship.

"This award is for our people, and they deserve it," Cowen said after the national announcement on Monday (Sept. 21). The Carnegie honor "recognizes the valuable work being done by Tulane to build healthy, sustainable communities, locally and around the world," he said.

Adding that he was especially honored to be chosen by Carnegie, one of the world's leading supporters of higher education, Cowen said he hoped the award would "motivate others to support our civic engagement vision as we rebuild our community and provide a unique educational experience for our students."

Jay Lapeyre, chair of the Board of Tulane, said the award elevates the university's mission and stature to a new level. "It's national recognition for Scott's extraordinary leadership not simply at Tulane, but for the city and region."

He said to the Tulane community, "I know you all join me in congratulating Scott and, with immense pride, in thanking him for what he does for Tulane University."

The New York philanthropic foundation chooses "exceptional leaders of American higher education" for the annual honor. It recognizes individuals who have demonstrated outstanding leadership in curricular innovation, reform of K-12 education and promotion of strong links between their institution and their local communities.