From Creation to Eternity

The Tulane chapter of Phi Beta Kappa is celebrating its 100th anniversary this spring with a lecture on origins. Matt Cartmill, an anthropology professor at Boston University, will speak on “Evolution, Creation and Eternity: What's Wrong With the 'Creation' Part of 'Creation Science'?” on Wednesday (April 22) at 5 p.m. in Jones Hall 102. The talk is open to the public, with a reception following on the Jones Hall patio. 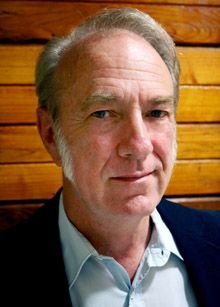 Matt Cartmill, an anthropology professor at Boston University, will discuss philosophical views about creationism at a lecture celebrating the 100th anniversary of the Tulane chapter of Phi Beta Kappa academic honor society.

Cartmill is expected to address issues related to philosophy and theology and not scientific concerns. He says, however, that believing in God is not incompatible with faith in science. The Bible, he adds, should be accepted for its symbolic meanings rather than taken as literal truth.

“The bottom line is that the conventional philosophical picture of God, as existing outside of time, means that God can't be the cause of any event in a scientific sense, only in the theological sense,” says Cartmill, who also is a research professor of evolutionary anthropology at Duke University.

In addition to the Cartmill lecture, the centennial of Tulane's Phi Beta Kappa chapter is being marked by an exhibition in the Special Collections Gallery on the second floor of Jones Hall. The exhibit includes John Kennedy Toole's Phi Beta Kappa certificate. The late Toole graduated from Tulane in 1969 and posthumously was awarded a Pulitzer Prize for his novel A Confederacy of Dunces.

The exhibit also includes photographs on loan from the national Phi Beta Kappa organization, documenting its history. Phi Beta Kappa is the nation's oldest academic honor society. The exhibit is open to the public from 9 a.m. to 5 p.m. through April 24.

The chapter will induct its 100th class in a ceremony on May 14, at 4 p.m. in the Qatar Ballroom of the Lavin-Bernick Center, followed by a reception for inductees and their families. Presiding will be Brian Brox, assistant professor of political science, who recently was elected president of the chapter.