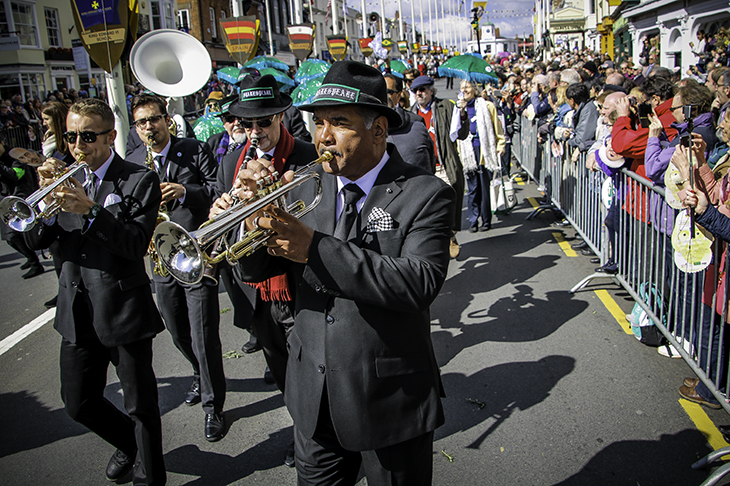 Wendell Brunious (trumpeter on right) leads members of his jazz band during the procession along the streets of Stratford-upon-Avon. (Photo by Arielle Pentes)

Under gloriously sunny skies, representatives of the Tulane University School of Liberal Arts, along with the Wendell Brunious Brass Band, participated in a traditional jazz funeral that paraded through the streets of Stratford-upon-Avon to celebrate the 400th anniversary of William Shakespeare’s death. (View the video, below.)

In true-to-New Orleans form, the brass band led the procession complete with a grand marshal donning a beautifully embroidered Shakespeare sash and holding a glittered umbrella. The jazz funeral, which took place Saturday (April 23), was the talk of the town. A record number of locals and Shakespeare fans from around the world gathered for the festivities.

Jovial onlookers and participants of all ages watched with smiles, cheers and genuine excitement as the jazz funeral weaved its way through the historic, rosemary-scented streets to the final resting place of Shakespeare in the grand Holy Trinity Church.

“What the presence of the jazz band in Stratford today proves is that Shakespeare is a citizen of the world.”

The commemorative day, which marked both the birth and death of the bard, saw many in costume or wearing masks, all focused intently on the unique headliners of the festivities.

Sarah Summers, Stratford’s town clerk, who was integral to bringing Tulane to the anniversary, spoke about what the jazz funeral meant to the celebration.

“What the presence of the jazz band in Stratford today proves is that Shakespeare is a citizen of the world,” said Summers.

During a ceremony that followed the procession, Summers presented Carole Haber, dean of the School of Liberal Arts, with a proclamation from the town.

Beginning May 9 and continuing through May 31 at the Newcomb Art Museum on the uptown campus of Tulane, the public will have the opportunity to view the traveling exhibition of First Folio! The Book that Gave us Shakespeare.