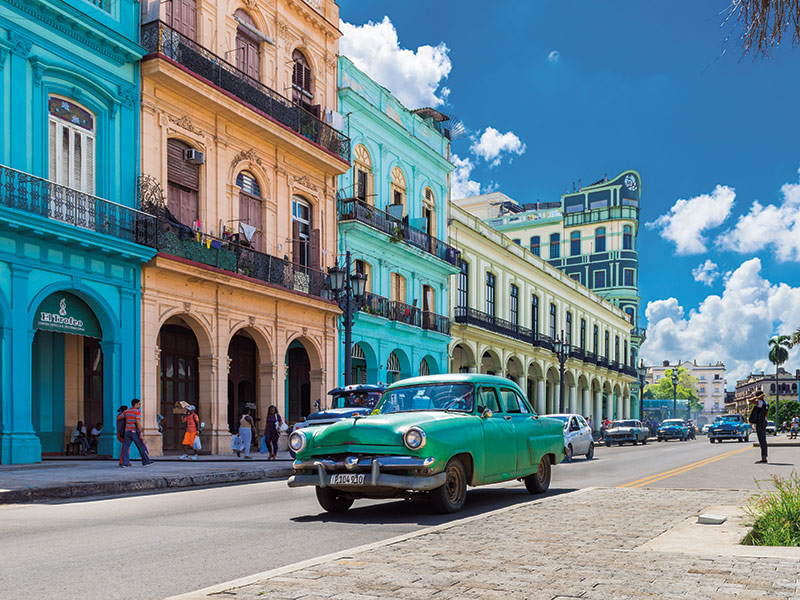 Editor’s note: This column reflects the personal experience of Tulane alumnus Angus Lind. It appeared first in the September 2018 issue of Tulanian.

I’d like to report that Cuba is beguiling, enchanting, charming and a really fun place to visit like Key West, which lies 86 miles north. But after three days in Havana, the capital of the so-called “Pearl of the Antilles,” I’d say none of those adjectives fits. Cuba has left me bewildered, saddened about its oppressed people, its poverty, and the unfulfilled opportunities and potential that could be realized but are so far in the distant future, if ever. If you’re thinking about Cuba as a fun, relaxed, hip island vacation where you can chill, I have a word for you: Jamaica.

Don’t get me wrong—there is beauty and entertainment in Cuba. In Havana Vieja (Old Havana) are majestic edifices, several of them resembling the Cabildo and the Presbytere in New Orleans.

But not all the buildings look like this. Many are in disrepair, need paint, and it is obvious there’s been no maintenance in decades. Many of the taxis you take are vintage, pre-1959 brightly painted convertible Buicks, Chevys, Dodges, Chryslers and Plymouths. Very cool riding in cars with fins.

But step out into the countryside, as our large travel group did on the bus ride to and from the airport and to Hemingway’s estate, and you see sights that are more than disconcerting: People cutting grass with machetes, not lawnmowers. A horse-drawn ancient wooden work wagon. People walking miles on the side of a road carrying bags. Washtubs and clotheslines everywhere. Shanties with rusted-out corrugated tin roofs and tarps with large rocks on top holding them down. A truck with its bumper tied to a post on the corner so it wouldn’t roll downhill. Brakes? I’m thinking not.

Beloved by Cubans, Ernest Hemingway and his wife Martha lived in Cuba for 21 years (1939–60) during which time he wrote seven novels, including The Old Man and the Sea. They purchased a gorgeous home in farm country on eight acres many miles from Havana. The home is chock full of big game trophies and thousands of books and artifacts. He hosted a fishing tournament and there is a picture of the 59-year-old author presenting the winning trophy to 33-year-old Fidel Castro. A fix? Es posible.

We saw colorfully attired Latin salsa dancers doing mambos, rhumbas and sambas. We heard mariachi bands play “Guantanamera” as much as we hear “When the Saints Go Marching In” in New Orleans.

Despite the hardships, most Cuban people seem to have a love for their country and a good sense of humor. There are differences between government guides and the guides that we hired out of Miami because the government guides present a rosy picture of almost everything, are fluent in misinformation and excuse anything that is amiss with a simplistic “This is Cuba.”

All of which makes it no easier to feel the true pulse of Cuba—because it is a complicated, enigmatic country. Hemingway did not know today’s Cuba.

But maybe the easiest way to explain it away is a prophetic line from The Old Man and the Sea: “Now is no time to think of what you do not have. Think of what you can do with what there is.”