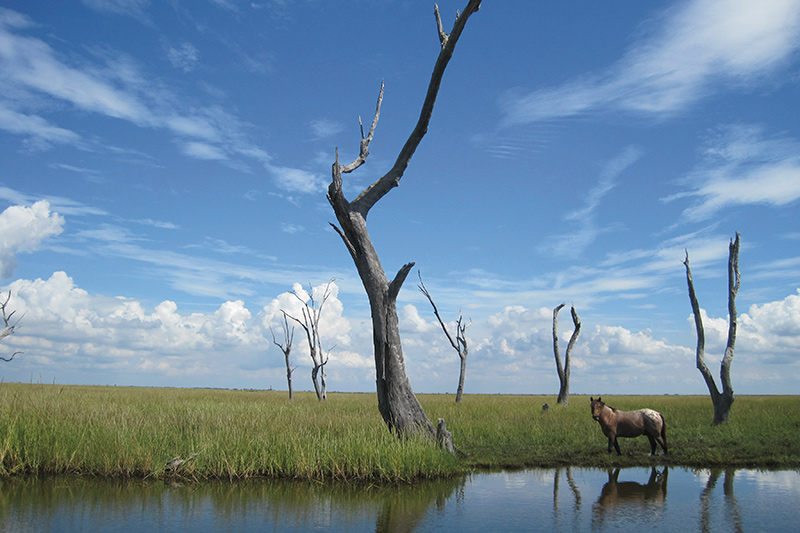 A 2010 photo shows the landscape of the Pointe-au-Chien Indian Tribe in South Louisiana. (Photo by Laura Kelley)

I had been troubled as the 300th anniversary of the founding of New Orleans approached this year by the glut of promotional Tricentennial messages and aesthetics that read as unwittingly pro-colonialism. Our French roots looked to be cause for celebration, but the Indigenous Tribes, who lived here for thousands of years before the arrival of the colonizers who claimed and renamed this place, were nearly invisible.

I mulled: What could the anniversary teach us about the Native-colonial encounter three centuries ago, as well as about this moment in our world and our future together?

An attempt to answer this question came about through a partnership between Adjunct Professor of History Laura D. Kelley, New Orleans Center for the Gulf South Assistant Director Denise Frazier and others, who coordinated the daylong symposium “Indigenous Spaces, French Expectations: Exploring Exchanges Between Native and Non-Native Peoples in Louisiana,” this spring.

For 13 years, Kelley has collaborated with members of Louisiana’s French-speaking Tribes. She teaches the service-learning course Indian Tribes Down the Bayou: Native American Communities in Southeastern Louisiana and is the New Orleans Center for the Gulf South partner in the Third Coast residential learning community in Sharp Residence Hall.

The symposium was a step, with more to follow, toward having a more informed conversation about Louisiana’s Indigenous peoples and their cultural heritage, the value of understanding all they have lost and contributed, and how critical their input is for the rebuilding of our vulnerable coastline.

Monique Verdin, artist and member of the United Houma Nation Tribal Council, installed the symposium’s artistic centerpiece, woven palmetto tapestries on the branches of an oak tree near Newcomb Hall. The tapestries held photographs of Verdin’s family and friends in the Mississippi River delta, binding a way of life to place. Jars of native pollinator seeds were nestled amongst the tree’s roots and a big, blue shrimp net hung from a branch overhead onto a circular bench surrounding the tree’s thick trunk.

Verdin’s living assemblage beckoned in the sunlight, providing space for quiet reflection and chance encounters, a view of images from the coast and waters, and time with the dazzling live oak tree, whose life preceded all of ours.

“The nature is quite resilient if you let it do what it wants to do,” Verdin said, about medicinal plants and nature. “Where plantations once sat, petrochemical plants and prisons now sit. That is the reality along the banks of the Mississippi River. Colonization has left a mark that is tied to a corporate, extractive economy, and we have to recognize that we can’t just keep taking. The nature has its own rights, and we need to live within them. And if we respect that, we will be blessed in return.”

Dare to Look Within

During the symposium, we locked into place—the soft land beneath us—and traveled time, from the formation of this earth dumped by the Mississippi River to archaeological concerns about when and whether to disturb what it holds, and on to linguistics analyses and musicological revelations.

For our team at the New Orleans Center for the Gulf South, the symposium was a time—like any other day—to practice one of our mantras: Dare to look around. Dare to look within. And to welcome our guests to do this, too.

The New Orleans Center for the Gulf South brings scholars, artists and practitioners from different backgrounds together for learning and collective contemplation of often-uncomfortable topics. Our hope is that participants will leave these experiences altered and energized, with more nuanced and fact-based knowledge and with a refreshed ability to consider their own agency on earth. In our world of screens, busyness and calls to action and service, we are arguably desperate for welcoming, educational experiences where we can absorb and sit with truths of our times.

Participants in the symposium included French social scientists from the Académie des Sciences d’Outre-Mer, whose research focuses on former and existing French colonies, and leaders of the French-speaking Native Tribes of Southern Louisiana, often collectively called the “Petites Nations.” These Tribes (the Alligator Band of the Atakapa-Ishak Nation, Isle de Jean Charles Band of the Biloxi-Chitimacha-Choctaw Tribe, Pointe-Au-Chien Indian Tribe, Tunica-Biloxi Tribe and United Houma Nation) whose dramatic influence on Europeans and Africans has long been understated and is often misunderstood, are now at the forefront of global climate issues. Because of coastal erosion and rising sea levels, they are forced to choose whether to build higher in order to remain on their ancestral lands or to leave their homeland and migrate inland.

In addition to the Native tribal leaders and our French guests, faculty, students and graduate students from Tulane’s schools of Liberal Arts, Architecture, and Science and Engineering, and the ByWater Institute, as well as other universities and community members participated.

Elizabeth Ellis (SLA ’10), a former student of Laura Kelley’s, a citizen of the Peoria Tribe of Indians of Oklahoma and a professor at New York University, described how the small, agile Petites Nations strategically played the French, Spanish, British and Africans to protect themselves against larger Native Tribes’ political power conflicts, the chaos of the Native slave exchange, and the ongoing increase in colonial land claims and military force.

Tulane PhD candidate Shane Liefan analyzed a 1718 Chitimacha calumet cere­mony through which he revealed how Indigenous processional rituals may have influenced musical parading traditions that still exist today in New Orleans. I sat there riveted, as he complicated the familiar narrative that almost always focuses on Europe and Africa. For many of us, the day was packed with these experiences, shifting from storylines we thought to be true, yet were incomplete, because the Indigenous parts of the stories have been fundamentally ignored in most educational settings for so long.

Discussions went deep into the present-day life of tribal members and pressing issues: ongoing legal struggles for federal recognition, ramifications of levees and levee failures, the BP oil spill and chronic, smaller spills, and the potential impacts of various coastal protection and river diversion plans. It is widely known that coastal erosion is caused by the channeling of the Mississippi River by 20th- and now 21st-century engineers, canals and pipelines cut by the oil and gas industry, rising sea levels due to climate change, and seismic activity. Lesser known are the intimate details of when cultural heritage is tied to place and that place is disappearing quickly, and what is left is being poisoned by toxic chemicals.

Presenters spoke in English, French, French Creole and Native languages, fluidly moving from one language to the next. All the words began to feel like embodiments of humans, of how related and melded we all are and how familiar and unfamiliar we are to one another. There were formal and diplomatic transatlantic greetings and funny moments that reflected our common humanity. The presence of many languages, and examples of how these languages are evolving, helped convey the longevity, richness and complexity of our cultural encounters and exchanges. Tulane undergraduate student Nathalie Clarke served as translator for a roundtable of tribal members, reminding all that there is a place for remarkable students of all educational levels to shine in our programming. Her live translation also served more generally as a reminder of the kind of miracle that communication among peoples is.

In the “interdisciplinary” exchange of the symposium, the contours, distinctions and strengths of singular disciplines drew out ways in which they inform one another. Though their methods and language differ, the geographer, archaeologist, historian, musicologist, botanist and artist learned from one another. Each presenter “played” their own disciplines like different instruments, and the result was akin to an orchestral fullness, towards holistic knowledge.

From my own experience at this symposium, and reinforced later by feedback we received, the symposium offered the chance to commune across borders, creating camaraderie to fuel our spirits to stay alert and open. In our region, with global issues that soon all coastal peoples will face, we must establish models that help us see and accept where we are, and support us in being creative and respectful in our solutions.

During closing remarks, I asked everyone to hold hands, close their eyes and allow an image to surface. We were simply a group of human beings, sitting with truths of where we come from and where we are, brimming with care, questions and aspirations, and recognizing the humanity in one another. How is colonization not just a historical phenomenon, but a process that is still being done and undone? Look around. Look within.

Editor’s note: This article appeared first in the September 2018 issue of Tulanian.

Of missing persons, unidentified remains and cold cases
Yoruba science textbook will be put to the test
‘Dames at Sea’ features Tulane talents
From maritime law to marijuana, all in a week’s news
Artist, alumnus creates a whimsical world