This homecoming weekend, you can count on Tulane alumni from across the country to be in the Louisiana Superdome for the game against Marshall University. You can also bet that a former captain of the Green Wave football team will be in that number. 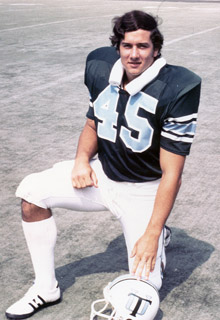 John Ammerman routinely wears his old team jersey to the games, saying it's a "natural fit" to wear it in support of the team. (Photo courtesy of Tulane athletics)

"I guess you can call me a die-hard," says John Ammerman, who played linebacker for the Wave during in 1976 and 1977. "I haven't missed a game this season."

Ammerman, senior vice president of Omni Bank in Mandeville, La., was one of the Tulane faithful who made the trip to the U.S. Military Academy at West Point, N.Y., last Saturday (Oct. 3) to watch Tulane beat Army 17-16. He says that the win shows the team's character.

"The win at Army was big from two standpoints," Ammerman says. "It was a come-from-behind victory, and it was also a win on the road. It was a real confidence builder."

Ammerman says he routinely sits with the same group of fans in the Superdome, several of whom are former teammates, where he will sport his old jersey to show his Tulane pride.

"Everyone loves it when I wear the jersey," Ammerman says. "I played in it for two years; it's a natural fit to wear your colors." He says he sees real potential in the team this year.

"The things Toledo [football head coach] is doing are great, and the kids seem to be buying into it. The fundamentals are there. There's a lot of good things going on with this team."

Ammerman is looking forward to the homecoming game against Marshall tomorrow (Oct. 10), where he will cheer along with his mother and his regular group of Wave alumni, all hoping for a three-game winning streak.