As he rolls to classes on the Tulane campus in his wheelchair, it's obvious that junior D.J. Dietze has disabilities that make going to college difficult. But some of his educational challenges aren't as obvious as the limited use of his hands and legs. 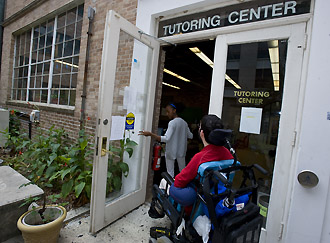 D.J Dietze, a junior, is among the 500 students with various disabilities studying at Tulane. Dietze's long-term goal is to run for president of the United States. (Photo by Paula Burch-Celentano)

After sustaining a traumatic brain injury from a gun accident when he was 12, Dietze also contends with some short-term memory problems and vision impairment. His long-term memory, however, is excellent.

"The doctors didn't expect me to live," says Dietze, who was in a coma for 23 days after accidentally shooting himself with his grandparents' gun.

"I feel like my childhood ended when I was 12, because I was thrust into adult responsibilities at an early age," he says.

Dietze, who is majoring in political economy and international relations, has achieved nearly a 3.7 GPA. He also is active in public-service projects and plans to pursue a career in law, focusing on rights for the disabled or environmental issues. Then, one day he hopes to run for president of the United States because, he says, "I love helping other people, and I desire to make the world a better place."

He is not the only student at Tulane with academic challenges and physical disabilities. Some disabilities are readily visible to others, while other challenges are not easily observed.

Patrick Randolph, manager of disability services in the Goldman Office of Disability Services, says that his office serves 500 to 600 Tulane students each year.

The office is committed to providing equal access and a friendly environment for all Tulane students, as well as staff and faculty members, says Randolph.

Among its services, the office arranges for accommodations or modifications in the academic or work environment to aid disabled individuals in their studies or jobs.