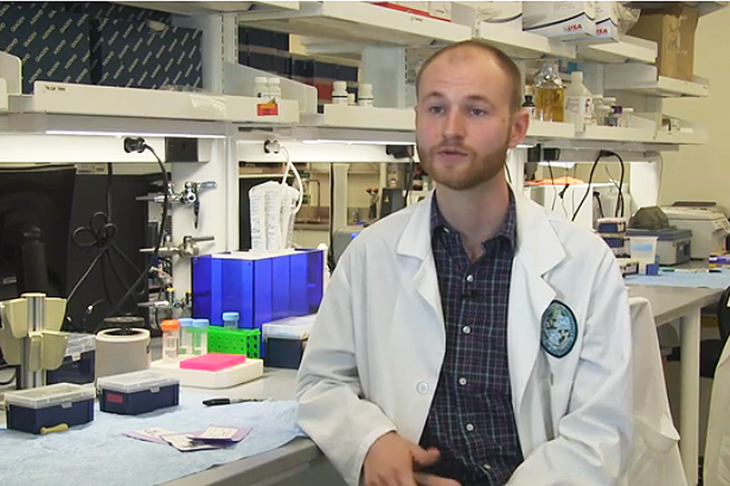 Nicholas Pashos, who is studying bioinnovation in a Tulane doctoral program, won awards this month for his company, BioAesthetics, and its new approach to breast reconstruction surgery. The company won $10,000 in the Tulane Novel Tech Challenge on April 13 and $25,000 at the Rice Business Plan Competition on April 16. (Photo by Tulane University)

Tulane University doctoral student Nicholas Pashos is continuing to gather recognition and funding for his BioAesthetics company, which won the $25,000 Women’s Health and Wellness Prize, and then first place in a challenge round for $1,000, at the Rice Business Plan Competition in Houston.

BioAesthetics has a new approach that could transform breast reconstruction surgery for cancer survivors. The team is developing a tissue-engineered nipple-areola complex that allows the patient’s own cells to regenerate a new nipple and areola in the event of loss due to trauma or disease. Pashos’ team also was named the first-place experienced team in the recent Tulane Novel Tech Challenge.

In addition, the Tulane team from D&P BioInnovations took fifth place in their semi-final round for $1,250. The regenerative medicine company, focused on repairing damaged organs, is developing an implantable medical device to functionally regenerate a damaged esophagus.

“They were great competitors!”

D&P is led by founder, inventor and chief science officer Derek C. Dashti, but Pashos is the company’s bioengineer and Karolina Kosakowska, its director of strategy, helped pitch the company at Rice. All three are in the bioinnovation doctoral program at Tulane.

“They were great competitors!” said Lea Aden Lueck, director of the competition.

The Rice University competition announced the awards on Saturday (April 16), an annual event which is promoted as the world’s richest and largest student startup competition. The top winner, TriFusion Devices from Texas A&M University, took home nearly $400,000 in cash and prizes.

This year’s competitors at Rice were the most diverse in the history of the competition and came from top universities around the globe. The teams were chosen from nearly 400 entrants to compete in several categories.