A surgeon may be skillful, a doctor may have a great bedside manner. But in this country, a physician also must be savvy about business in order to be successful. Bearing that in mind, fourth-year medical student Andrew Schutzbank set out to develop a new course at Tulane in the business of medicine. 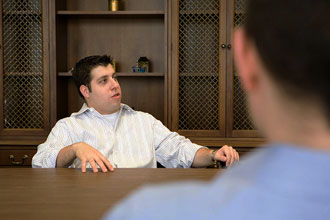 Schutzbank partnered with Dr. Jim Theis, an associate professor in the Department of Family and Community Medicine to organize a new elective for medical students in their final year.

The two-week course provides a basic understanding that will help future doctors navigate the complex regulatory and financial climate surrounding the practice of modern medicine.

"I had been wanting to plan this course for several years, but didn't have the time," Theis says. When Schutzbank approached him with his idea, Theis said, "Let's do it."

Schutzbank, who Theis describes as a "remarkable medical student," is pursuing Tulane's combined MD/MPH degree program. He has been involved with the medical school's curriculum committee since his first year.

"He did most of the legwork for the course, drafting a syllabus and arranging speakers," Theis says. The pilot course was offered to six senior medical students in January. The elective will be offered again in March, and twice in the next academic year.

Experienced community leaders in the fields of healthcare law, accounting, consulting, management and entrepreneurship volunteer to teach the course. They cover how to write a business plan, collection from patients and insurance companies, and other financial fundamentals of medical practice. The students witnessed firsthand the day-to-day operations in the solo practice of Dr. Patricia Jackson. 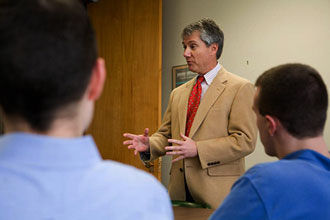 Dr. Michael Wasserman, a pediatrician in private practice, imparts wisdom about doctors being their own bosses to fourth-year medical students.

"The students in the pilot class especially liked the practical applications, the wisdom passed on by those who are out practicing medicine," Theis says.

Through the course, Schutzbank says the students gain access to individuals who can help dispel fear about physicians becoming their own bosses. "I want to impart that spirit [of entrepreneurship] to my classmates," Schutzbank adds.

After graduation, Schutzbank will enter residency training in general internal medicine, work on an MBA, and launch his own medical practice.

One day, after he retires, Schutzbank says he would like to establish a new medical school. The curriculum, he says, would depend upon where medicine is in 40 to 50 years.

Theis, who says he is glad Schutzbank will be a primary care physician, adds, "Nothing Andrew does would surprise me."