Donor Age Not a Factor in Kidney Transplant Success

A single kidney from a very young donor maintains the health of an adult with kidney failure as well as a kidney from an older donor, according to a study by Dr. Rubin Zhang and colleagues in the Tulane Abdominal Transplant Institute. 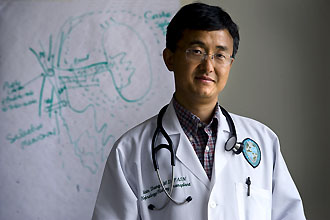 Dr. Rubin Zhang, clinical associate professor of surgery, says kidney function improves dramatically in the first year after transplantion, and it continues to improve into the third year. (Photo by Paula Burch-Celentano)

The study in the Clinical Journal of the American Society of Nephrology aimed to determine whether kidneys from deceased donors less than five years old were as effective when transplanted in adults as those from donors between the ages of five and 10 years old.

In most transplant centers, both kidneys of very young deceased donors are transplanted together into one patient. Determining the minimum donor age or body weight for splitting kidneys for transplant is controversial.

Transplanting both pediatric kidneys into an adult theoretically provides better kidney function, and surgeons do not usually divide kidneys when the donor is under five years of age. Giving each of two patients in need one organ from the same donor could increase kidney transplants, Zhang says.

"Single pediatric kidney transplants from donors less than five years can be utilized with acceptable complications and good long-term outcomes," he adds.

In the United States about 80,000 individuals are waiting for kidney transplants and 4,000 die each year before receiving transplants.

Complications were similar in the two groups and patients in the two groups lived a similar length of time. The youngest donor in the study was a nine-month old female; both of her donated kidneys remain healthy more than six years after transplantation into two different recipients.