The time has never been better for women to transform traditional power structures and become leaders in any field, according to speakers participating in the Newcomb College Institute's three-day leadership summit, “Power Lines: Women Transform the Grid.” 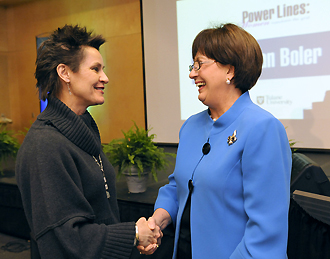 Former Louisiana Gov. Kathleen Blanco, who spoke on Saturday morning (Feb. 7), said she is looking for women to run for office to replace old-line politicians who have embarrassed the state.

“We still have a steep hill to climb if we want more women in politics,” she said. “I'm confident, though, that we can see more women meet the challenges.”

The key is for women to set the bar higher and to be part of something bigger than them. “Don't let this time pass you by,” Blanco added. “Don't fence yourself in. You just have to build those gates and walk through. Boldly push your power buttons and follow your dreams.” 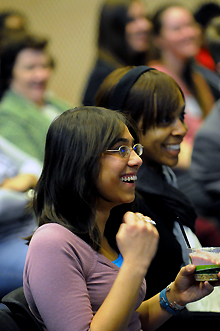 On Friday morning, Brazile challenged students to "hurry history" by entering politics, so she could witness the first woman being elected president.

“This generation is not going to be content in just opening up one door,” Brazile said, referring to the election of Barack Obama as the first African American president of the United States. “They are going to tear that glass ceiling apart.”

The focus turned to business and finance Friday and Saturday afternoons. On Friday, Yvette Jones, chief operating officer and senior vice president of external affairs at Tulane, moderated a panel featuring 15 members of the International Women's Forum of Louisiana. The panel presented strategies to deal with the biases and challenges women face in business.

Another summit session on Saturday featured microfinance experts Matt Flannery and Premal Shah from Kiva.org, a Web site that allows individuals to make small loans to low-income entrepreneurs, most of whom are women in third-world countries. “We used the Internet to create a market place,” Shah said. “All of the money is going directly to the entrepreneur through a third party. We have almost half a million [people donating] on our site right now, making loans.”

Flannery and Shah, who launched the Web site in 2005, hope to offer loans to low-income entrepreneurs in the United States, include New Orleans, in the near future. “We're only three years old and word is spreading very fast,” Shah said. “Thank you all for being a part of it.”

The summit is the latest of many events organized by the Newcomb College Institute, which provides academic, leadership and research opportunities to enhance the education of undergraduate women at Tulane University.