A promising new drug has been shown to extend life for men fighting tough-to-treat advanced prostate cancer, according to the results of a major international trial co-led by Dr. Oliver Sartor of the Tulane Cancer Center. 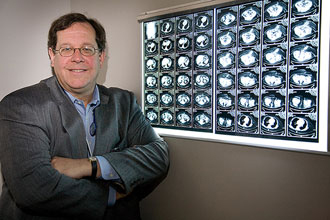 Dr. Oliver Sartor, the Piltz Professor of Cancer Research, is lead author of a paper about a clinical trial that showed promise for a new prostate cancer drug. (Photo by George Long)

An international Phase III randomized clinical trial for an investigational drug, cabazitaxel, showed that it reduces the risk of death by 30 percent in men with hormone-resistant prostate cancer, compared with standard chemotherapy based on the leading treatment, docetaxel.

"This agent will provide an important new therapeutic option for men with this advanced form of prostate cancer," says Sartor, the Piltz Professor of Cancer Research.

The results are significant because this is one of only three treatments to have shown a substantial statistical benefit in the fight against prostate cancer that no longer responds to hormone therapy, according to Sartor.

"There are no effective treatments available to help men with metastatic hormone-refractory prostate cancer whose disease continues to grow despite standard chemotherapy, and this large study shows an unequivocal survival benefit for patients who received cabazitaxel."

Sartor will announce the results on Friday (March 5) in San Francisco at the 2010 Genitourinary Cancers Symposium.

This drug trial was conducted at 132 centers, including Tulane, in 26 countries and involved 755 men.

Findings from the study will form the basis of a submission to the U.S. Food and Drug Administration for marketing approval of cabazitaxel by drug company Sanofi Aventis. Other studies are being planned to assess the effectiveness of cabazitaxel earlier in the course of prostate cancer treatment, before patients stop responding to docetaxel, Sartor says.