The Tulane National Primate Research Center is part of a nationwide program working to develop an inhaled version of an injectable antiviral drug for treatment of smallpox, a disease that was eradicated worldwide in the 1970s but has re-emerged as a possible weapon of bioterrorists. Chad J. Roy, principal investigator of the development program, says, "This work is essential." 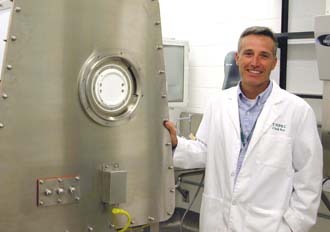 Chad Roy at the Tulane National Primate Research Center is participating in a three-center study of an antiviral drug for the treatment of smallpox, which has re-emerged as a possible bioterrorism weapon. (Photo by Robin Rodriguez)

Roy is director of infectious disease aerobiology at the primate center.

"The threat of smallpox is unique in that most of the population has not been vaccinated against smallpox because the natural threat was officially eliminated in 1980," Roy says. "Eradication of smallpox ended future vaccination programs in the general population and concerns of spread of smallpox by natural means. Now the specter of smallpox and its use as a weapon of terror has necessitated a revival in the development of effective medical products  vaccines and therapeutics  against the disease."

Smallpox occurs through inhalation of airborne variola virus. The inhaled antiviral drug cidofovir has been shown in studies to be effective against various pox models, producing long-term activity and retention in the lung tissue compared to injectable administration.

The Tulane National Primate Research Center has been awarded $8.8 million over the multiyear research program. It will test the effectiveness of the inhaled antiviral treatment on monkeypox, a virus used as a surrogate to study pox-viral infection. This work will take place in the center's new Regional Biosafety Laboratory.

"Because human smallpox is only kept in two repositories in the world and is only handled at biosafety level 4 laboratories, monkeypox infection in nonhuman primates will provide the experimental model for testing the antiviral's effectiveness," says Roy.