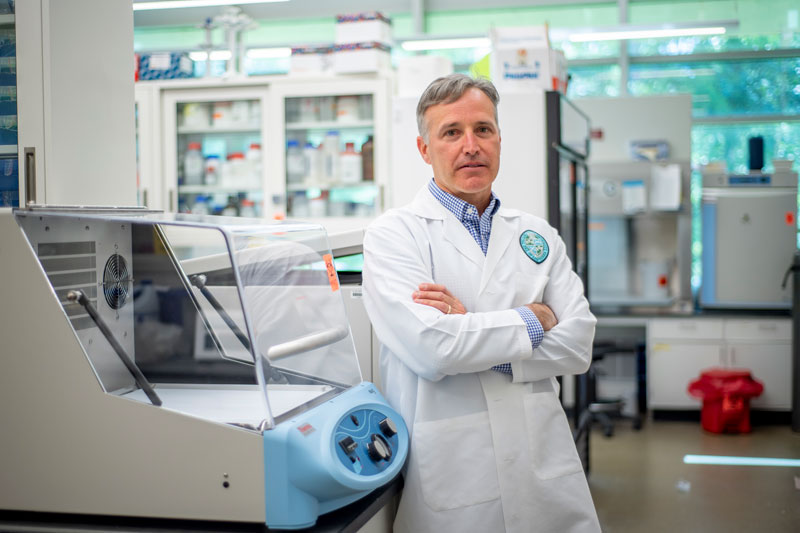 Chad Roy, PhD, director of infectious disease aerobiology at the Tulane National Primate Research Center, found that the novel coronavirus, SARS-CoV-2, survives in the air much longer than similar viruses such as SARS or MERS. (Photo by Paula Burch-Celentano)

One of the key factors scientists are trying to understand about COVID-19 is exactly how most people contract the virus — is it primarily breathing in airborne particles, touching surfaces contaminated by those particles or some combination of both?

Early research from Tulane suggests that air transmission may explain why the disease spreads so rapidly in highly populated spaces. Chad Roy, PhD, director of infectious disease aerobiology at the Tulane National Primate Research Center, found that the novel coronavirus, SARS-CoV-2, survives in the air much longer than similar viruses such as SARS or MERS.

Tulanian Now spoke with Roy about the preliminary results of the study, which showed the virus stayed infectious up to 16 hours in the air under controlled conditions.

For the study, you sprayed tiny, uniform droplets into a chamber to suspend the virus in the air for several hours. What did you find?

“We imaged those viruses that had been suspended for 16 hours to get some idea of what's going on with the actual viral particles. To our surprise, there was very little decay. Those particles remained infective after 16 hours in the air. That's an unusual finding. That's a long time for a virus to remain at least partially viable in a respirable aerosol, which constitutes a fraction of aerosols that are generated from infected COVID-19 patients.”

When people cough or sneeze, they produce thousands of droplets of various sizes. In this study you looked at only the smallest particles — those less than 2 microns — that are most likely to be airborne for a while.

“Your exhaled breath has particles in it. We can't see them because they're so small. Some fall out of the air stream quickly because they're larger than 20 microns, but some can float in the air for hours. The particle that we used, and that we generated synthetically, is that important fraction of particles.”

What do your findings mean for how the virus might travel under real-life conditions?

“This is a very limited data set. At this point it's only suggestive. What is kind of sobering about this data is that if you have the combination of a particle size, which we know human beings can generate, with a load in those aerosols of this virus that's got an unusual persistence, which we're showing through this this work, then that equals a plausibility of transmission of disease over longer distances in the air that would not be consistent with large droplet transmission. It makes the aerosol pathway of exposure and transmission a much more prominent pathway alongside those others. We always say let the data drive the conversation. This is a little chunk of that data that may be a clue in explaining why the virus spreading the way it is, and the overall contagion of it.”

The study is available on MedRxiv, a preprint server for scholarly articles in the health sciences that are not yet peer-reviewed.