As New Orleans works to rebuild its neighborhoods devastated by Hurricane Katrina, the city is focusing on building better than ever. Tulane's Sustainable Urban Ecosystem Initiative is at the forefront of those efforts in the lower Ninth Ward. 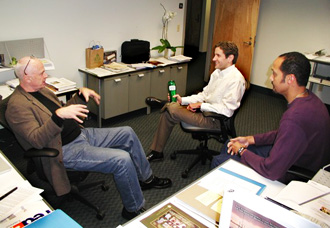 In 2005, the Tulane/Xavier Center for Bioenvironmental Research began the UrbanEco Initiative in partnership with the Tulane School of Architecture's City Center and several local, national and international academic partners. Their goal is to create communities with sustainable environmental, social and economic conditions.

Sustainability  meeting the needs of the present without compromising the ability of future generations to meet their own needs  should rank among the top priorities of developers, according to leaders of UrbanEco.

“The focus is on the dynamic interface and how humans interact and live,” says Charles Allen III, assistant director of external relations for the Tulane/Xavier Center for Bioenvironmental Research. “As people started rebuilding they ran into issues like high utility costs, homes not properly weatherized, and a lack of banks and quality grocery stores within a decent distance.”

UrbanEco has drawn national attention by helping other projects come to fruition like Global Green and Make It Right New Orleans, co-led by actor Brad Pitt. 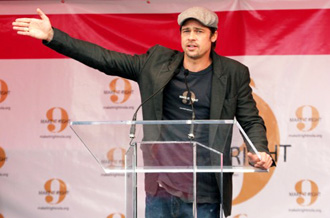 Actor Brad Pitt speaks during the Dec. 5, 2007, kickoff of the “Pink Project,” part of the Make It Right initiative in the Ninth Ward. (Photo by Virginia Miller)

Allen spoke alongside Pitt in a December 2007 interview with CNN's Larry King about the much-needed assistance that the programs bring to the Ninth Ward.

“Brad Pitt and the Cherokee Investment Group came to the lower Ninth Ward community with the idea for the Make It Right project and we fell in love with the notion,” says Allen, a leader in the Holy Cross neighborhood of the Ninth Ward.

While the goal of Make It Right is building homes to which New Orleanians can return, UrbanEco seeks to make sure the community has what it needs in the long run.

“We believe social networks and neighborhoods are at the foundation of a sustainable urban ecosystem,” says the center's deputy director Douglas Meffert. “We start with the social network, partnering with communities through their own self-empowerment as well as legal rights to make the requisite built and natural aspects of the neighborhood and surrounding environment as safe and sustainable as possible.”

According to Allen, research conducted through the UrbanEco Initiative will provide a better understanding of resilience, recovery and sustainability in the context of the city's natural ecosystems.

John McLachlan, the center's director, says that he's delighted to see that the UrbanEco effort has matured into the project that it is today.

“We thought that rebuilding New Orleans along principles of sustainability was a unique opportunity and responsibility for an environmental center like ours,” says McLachlan.