With Economic Bailout Plan Stalling, What Next?

Calling for “flexibility and practical thinking” across the political aisles, several Tulane University faculty members say that Congress must act soon to fix the nation's troubled financial system, which was jarred on Monday (Sept. 29) by the rejection of a $700 billion bailout plan for the mortgage industry by the U.S. House of Representatives and a resulting 777-point slide by Wall Street. 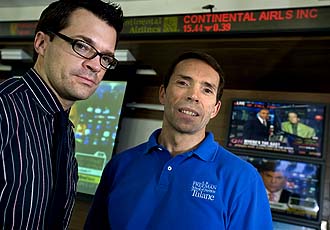 Jeff Stacey, left, assistant professor of political science, and Bill Reese, right, professor of finance, say that politics is holding back a resolution to the current financial crisis. (Photo by Paula Burch-Celentano)

While the falloff tore $1.2 trillion in value from U.S. stocks on Monday, by Tuesday morning (Sept. 30) the panic seemed to be in check, but it may be short-lived if the House can't come to an agreement this week.

“The House is now really putting the situation in jeopardy by standing up on principles,” says Jeff Stacey, assistant professor of political science. “The problem is, in situations like this, you need to be a little more pragmatic. I find it alarming that in an economy so distressed and volatile as this, where things could get far worse, that there isn't a level of flexibility and practical thinking to get some pragmatists together across the political aisles and get this done.”

The main sticking point for some politicians was the staggering price tag of the proposal  something Stacey says is scaring much of the public unnecessarily.

“The reason this figure is so large is because you have to send a signal of credibility to the market,” Stacey says. “Investors need to know that this problem will be solved. They are looking for a threshold whereby that signal will be credible. With the situation as bad as it is, that signal needs to be extra large.”

Bill Reese, professor of finance in the A. B. Freeman School of Business, agrees.

Both Reese and Stacey say such a large price tag makes for a large target at which politicians can take aim during this election year. The fact that the plan is so multifaceted means some people on Wall Street don't understand it, much less those on Main Street.

“You have a lot of congressmen that have to get reelected,” says Reese, “that's their No. 1 priority. And you have a lot of constituents who don't understand the situation very well, and a congressman can come across looking good if he says he's fighting a bailout with taxpayer money.”

Stacey adds, “The complexity of this is so immense that it is easy for critics and politicians to come along and cherry pick the process and depict it as something that it isn't. If you're up for election in the House, and you want to play politics with this, you can do it very easily, and no one will call you on it, because it's so complex.”

There needs to be an infusion of capital into the market so banks can start lending again, Stacey warns. “Anything that doesn't do that will not gain confidence in the market.”

While some prospects look dire, Peter Ricchiuti, assistant dean of the Freeman School, says he doesn't anticipate a crash if some agreement can be reached in Congress.