Across the United States, nearly 600,000 people lost their jobs in January, the largest monthly payroll cut in 35 years and further proof that the economy is facing historic problems. A less quantifiable outcome of the unfolding recession is the effect of the layoffs on those in the nation's workforce who are looking over their shoulders wondering “who's next?” according to Angelo DeNisi, dean of the A. B. Freeman School of Business at Tulane. 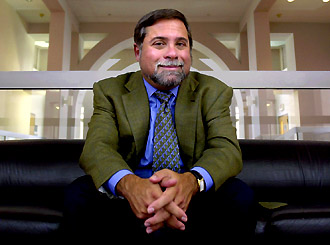 “If you work in a bank, you understand what's happening; if you work at Starbucks, you don't necessarily know why you're being laid off,” says Angelo DeNisi, dean of the A. B. Freeman School of Business at Tulane. (Photo by Paula Burch-Celantano)

“Obviously, this causes a great deal of stress,” says DeNisi, an expert in industrial and organizational psychology who holds the Albert Harry Cohen Chair in Business Administration. “The biggest problem with things like this is that everybody starts worrying, and you lose a lot of productivity at work.”

DeNisi believes the stress and paranoia come from a lack of understanding about how the financial situation is trickling down to industries outside the financial sector.

“Most people don't understand the basis for the layoffs,” DeNisi says. “If you work in a bank, you understand what's happening; if you work at Starbucks, you don't necessarily know why you're being laid off.”

But no matter the occupation, the consequence of layoffs on individuals is always more than financial.

“Most of us identify a great deal with our jobs,” DeNisi says. “It's who we are, and if we're not that any more, it becomes difficult to define what we are. In the long run, that may be one of the more negative impacts of this.”

DeNisi disagrees with the idea that layoffs are the magic-bullet solution to a company's financial woes, and points to research indicating that changes to management structure are more efficient in improving the bottom line. Furthermore, he suggests that the reasons for the layoffs may be more closely related to executives' personal finances.

“Stocks often respond favorably to layoffs because that's what Wall Street thinks companies should do,” DeNisi says. “Executives own stock in these companies; you lay off workers and that stock goes up.”

With big companies laying off tens of thousands of employees across the nation, DeNisi says it is to be expected that workers turn to unions for security and a feeling of control. That might be a comfort to the psyche  for a while.

“Union or no union, working for General Motors is probably not the most secure job, and I'm not sure the United Auto Workers union is going to be able to do anything about that.”

Workforce reduction is not only a poor remedy for the ailing economy, but one that DeNisi says will likely make the symptoms worse.

“People are getting laid off, they have less money to spend on a company's product, and it just cycles around,” DeNisi says. “The answer has to be improving credit markets, not just giving money to big companies, some of whom are cutting jobs.”

He warns that the stimulus package passed by the Senate last week will not put an end to the layoffs anytime soon, and the anticipation of immediate positive results may ultimately produce further anxiety and frustration.

“A lot of people are expecting that once it is signed into law, the layoffs will stop immediately. That's simply not true,” says DeNisi.