Economic Woes Delay Retirement for Some

An estimated $15 trillion in wealth has been lost in the housing bubble and stock market crash. With pensions and 401K funds taking tremendous hits, the retirement dream of a gold watch and days spent travelling may be further away than many Americans had hoped, says Carole Haber, history professor and dean of the School of Liberal Arts. 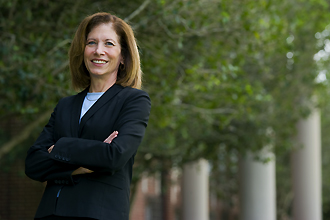 Carole Haber, history professor and dean of the School of Liberal Arts, says that because of what's happening to investments, many people will continue to work far longer than they had planned. She is the co-author of Old Age and the Search for Security: An American Social History. (Photo by Paula Burch-Celentano)

“Because of what's happening to people's investments, a lot of people will continue to work far longer than they had planned,” says Haber, whose academic interests include aging and death. She has written several books including Beyond Sixty-Five: The Dilemma of Old Age in America's Past, and Old Age and the Search for Security: An American Social History, which she co-authored with Brian Gratton.

“People will be working until they are 68 or 70 in order to meet their needs,” says Haber. She says this pattern will be a reversal of historic trends where people had been retiring at younger ages.

Another result of the economic collapse is that previously retired people are now returning to the workforce. Without the benefit of the income they were receiving from investments, many retirees depend solely on Social Security, which often isn't enough to cover their basic monthly expenses.

“Older people are moving back into households with their adult children due to the fear of not being able to support themselves,” Haber says.

This situation is putting immense pressure on what Haber calls the “Sandwich Generation,” the age cohort that is caught between supporting their own children and taking care of their aging parents.

As life spans increase, members of the Sandwich Generation will have to support their parents longer, at a higher cost, thus pushing their own retirement down the road.

“The population over 85 is the fastest growing age segment in the country,” Haber says. “That absolutely has an impact on retirement.”

An unintended consequence of people delaying retirement is that fewer jobs may be available for younger workers and upward mobility for them may be stifled as older workers decide to stay in their jobs longer.

“In some ways that's why mandatory retirement was started,” Haber says. “It was the idea of a fluid workforce, getting older people out so younger people can enter the workforce.”

She says, however, that Social Security is not in a “crisis” as is sometimes presented. Social Security is projected to pay out more than it takes in by 2040. By that time the federal government will have fixed the problem through several suggested alterations or combination of changes to the system.

“Social Security is considering a number of possible changes in the program in order to continue paying full benefits to the elderly,” Haber adds. “One proposal is to raise the age of retirement to 70.”