Since President Barack Obama assumed office in January, he has put forth an ambitious political agenda, with improving education high on the list. The president's economic stimulus package includes more than $100 billion in new education funding. On Friday (March 20), U.S. Secretary of Education Arne Duncan met with a group of education stakeholders at a roundtable meeting at Tulane University to discuss a vision for education in Louisiana. 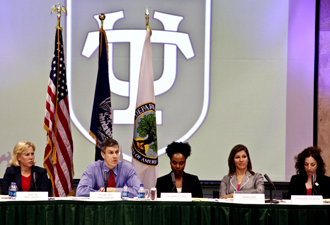 U.S. Sen. Mary Landrieu, left, and U.S. Secretary of Education Arne Duncan, second from left, take part in a roundtable of about 50 educational leaders discussing the future of schools in Louisiana. (Photos by Guillermo Cabrera)

In the roundtable discussion that Tulane President Scott Cowen characterized as “frank and fruitful,” educational leaders exchanged ideas about the future of education in Louisiana and the role Duncan's office can play in continuing to transform schools into model institutions of learning. The Scott S. Cowen Institute for Public Education Initiatives at Tulane helped organize the meeting attended by about 50 educational stakeholders.

“I am excited about this opportunity for dialogue about education, the great equalizer,” Cowen said. “We are all here today because we care about the children and the young adults of New Orleans and Louisiana.” He met with Duncan briefly before the roundtable discussion that was held in the Lavin-Bernick Center on the Tulane uptown campus.

Cowen said he was “delighted” that Duncan could attend the meeting “to share his innovative, new ideas for the future” with leaders in K-12 education and higher education.

On Cowen's agenda was continued funding for New Orleans public schools, particularly for facilities. According to the Cowen Institute, New Orleans schools had $1 billion of deferred maintenance before Hurricane Katrina, and schools sustained significant damage after the storm. A $2 billion master school facilities plan recently was adopted, but less than $1 billion has been funded. 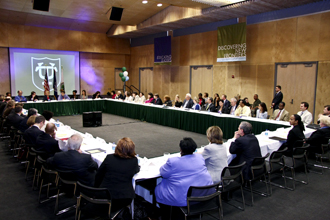 The roundtable discussion at the Lavin-Bernick Center on the Tulane uptown campus was organized by the Scott S. Cowen Institute for Public Education Initiatives.

“It's important to encourage [university] graduates and students to get into the [public] schools,” Duncan said.

Shannon Jones, executive director of the Cowen Institute, said Tulane already has been undertaking all three recommendations. She notes that Tulane is well positioned to serve as an example for other universities to follow.

“What was important about this meeting is that we had K-12 and higher education leaders in the same room, and the two groups need to be aligned to ensure the preparation and success of the next generation,” Jones said. “Secretary Duncan saw the successes that we've accomplished since Hurricane Katrina and the challenges we still face, and heard how to prioritize the needs. More importantly, he saw that New Orleans is on the cusp of becoming a national model.”

Duncan, who led one of the country's largest school districts in Chicago before his current appointment, has a reputation for getting things done. While in New Orleans on Friday, Duncan visited two charter schools, Edna Karr High School in Algiers, La., and Sophie B. Wright Charter School in the uptown area of the city, and encouraged students to consider a career in education.

According to news reports, Duncan noted the “phenomenal innovation” going on in New Orleans education.