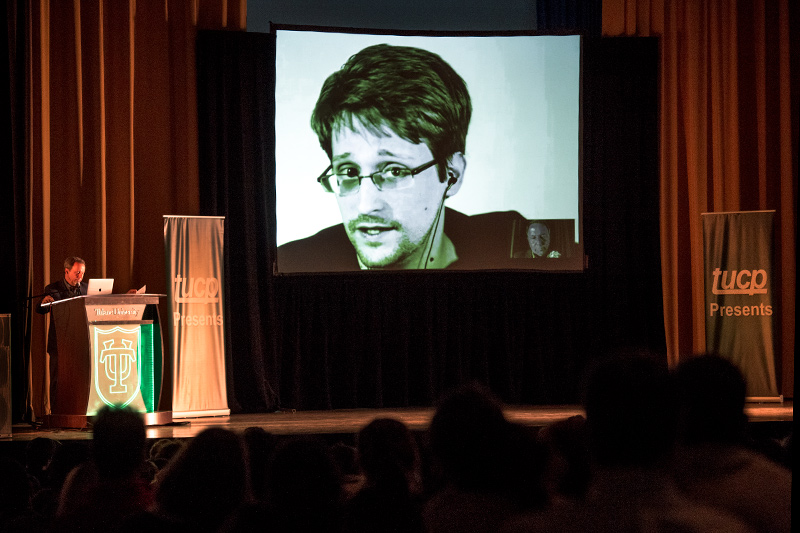 The live discussion was conducted via video chat by Pulitzer Prize-winning journalist and author Ron Suskind, who appeared in person at McAlister Auditorium and described Snowden as “an extraordinary actor on the global stage.” The event was sponsored by Tulane University Campus Programming.

Snowden’s ordinary life belies the intrigue leading up to it: On May 20, 2013, he left his job at the NSA and flew to Hong Kong, where he revealed thousands of classified NSA documents to journalists. The documents revealed the U.S. government’s warrantless surveillance program. After releasing the documents, Snowden was charged with violating the Espionage Act of 1917. He then flew to Moscow, but the U.S. government canceled his passport while he was traveling through Russia. He has been more or less stuck there, having been denied asylum elsewhere and facing espionage charges if he returns to the United States.

“One need not look very far back in history to find examples of abuse and inhumanity that were clearly immoral, but absolutely legal.”

Snowden remained steadfast that the public had a right to know about the surveillance; the U.S. government recently reauthorized certain types of surveillance.

“This might sound a little bit anarchist, at least in our modern times … but the reality is, law is no substitute for conscience. This is not an individual decision: This is a historical observation; this is a realistic observation,” Snowden said.

Referencing slavery as an example, Snowden continued, “One need not look very far back in history to find examples of abuse and inhumanity that were clearly immoral, but absolutely legal.”

Snowden’s demeanor was composed, and his comments were occasionally punctuated with dark humor.

He answered a previously submitted question from business student Brian Thrasher, a junior: What protections would he like to see in place for future whistleblowers? The right to a public interest defense, Snowden said.

Snowden said he wants to come home and would return if the U.S. government changed the Espionage Act enough so that he could present his case during a jury trial. So far the government has declined that offer.

Builders, heroes and a voice for girls
A voice for girls
New Orleans Jews shaped local history
Jennifer Lawrence to appear alongside activists and journalists at Unrig the System Summit
Decoding the work of Leonardo da Vinci